Study may help explain how genes and other factors influence an individual’s response to restricting calories. 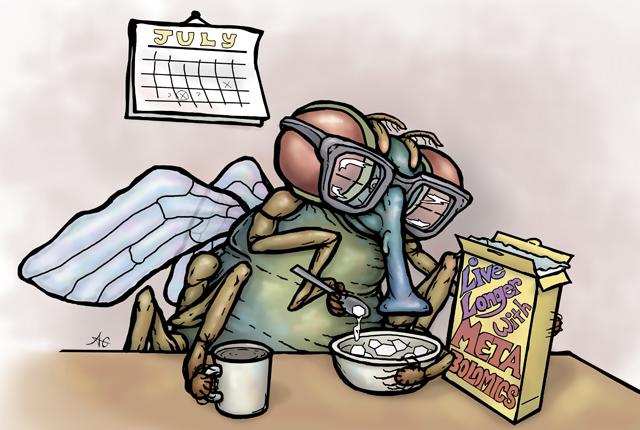 Changes in a few small molecules involved in a cell’s metabolism seem to indicate whether a restricted “life extension” diet will actually extend, shorten, or have no effect on lifespan, a study of fruit flies has found.

The findings suggest that analyzing the level of small molecules in cells, an approach called metabolomics, may help us understand how calorie-restricted diets affect aging, and how genes, environment, and other factors influence an individual’s response to calorie restriction.

“If we can use the metabolome to understand variation in something as complex as lifespan extension, we should be able to use it to understand many other differences we see across populations,” said Kelly Jin, a computational biologist in pathology at the University of Washington (UW) School of Medicine. She was lead author on the new study.

The research paper was published in the July 9 edition of PLOS Genetics.

A cell’s metabolism involves basic chemical reactions that occur for the cell to develop, survive, and proliferate. The small molecules that participate in, and are generated by, these reactions are called metabolites. Metabolites include such things as amino acids that are the building blocks for proteins, sugars and fats that are broken down to generate energy, and products of those reactions. Collectively these molecules make up the metabolome.

In the new study, the UW researchers worked with collaborators at the Buck Institute for Research on Aging and others to understand how calorie-restricted diets may prolong life in different strains of flies.

Such diets can extend lifespans, according to previous studies of different species, including yeast, worms, fruit flies, and mice. Although low-cal diets have not been shown to lengthen humans’ lives, they have been shown to cause weight loss and improve such disease-risk factors as high blood pressure and elevated blood sugar and cholesterol.

The effects of these diets, however, are not uniform. A strain of fruit flies with one particular genetic makeup, or genotype, might see an increased lifespan while a strain with another genotype might see no effect or even a decrease in lifespan.

A cell’s metabolome, on the other hand, distills variation in the complex upstream processes, such as gene expression, gene transcription and protein synthesis, said Daniel Promislow, the paper’s senior author. He is a UW professor of pathology and biology.

The complex interplay of these factors and factors in the environment ends up being filtered down to a much smaller number of metabolites, which are simpler to measure and closer to the trait you’re studying,” Promislow said.

The UW researchers compared the levels of 105 metabolites in fruit flies from 178 strains, which had been fed a normal diet or a restricted diet. They analyzed whether there was a relationship between the flies’ diets, their metabolite levels, and changes in their lifespans.

“Dietary restriction dramatically remodeled the metabolome in consistent ways across all 178 fruit fly genotypes,” Jin said. These included levels of some key amino acids used in the synthesis of proteins as well as metabolites involved in the alpha-ketoglutarate/glutamine pathway, a process involved in energy generation, among other things.

Genetic analysis was able to identify only one gene clearly associated with the fruit flies’ lifespan response to diet restriction. So the researchers used a novel statistical tool, called network analysis, to link the metabolites to changes in lifespan, and then looked for genes linked to those metabolites.

With this approach they identified several genes that appeared to play a role, including one variant of a gene called CCHa2-R that codes for a neuropeptide receptor found in the brain and the gut and which is involved in nutrient sensing and satiety response.

“Our findings show how studying an organism’s metabolome not only can help reveal the genetic variation behind complex traits, but also help explain the mechanisms that underlie variation seen in these traits,” said Jin.