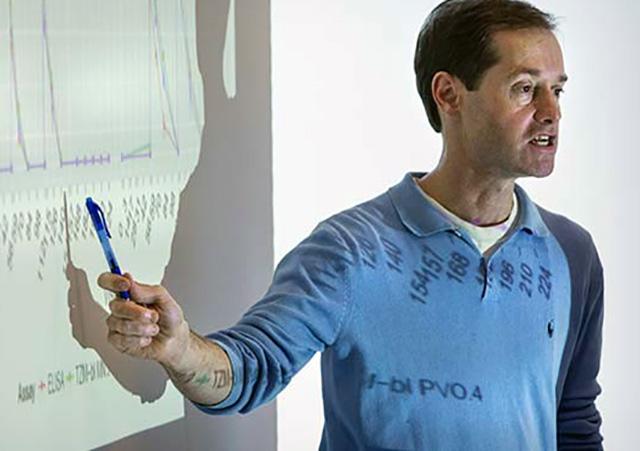 Scientists have worked for nearly 80 years to produce a safe, effective vaccine for dengue, a flu-like illness that affects about 400 million people a year. The challenge is creating a vaccine that provides immunity against all four of the virus’s major strains to protect people from severe dengue.

Now there is a new, innovative approach to dengue vaccine development, according to a paper published Aug. 20 in the Proceedings of the National Academy of Sciences. Researchers at the Fred Hutchinson Cancer Research Center and University of Washington School of Public Health led the study.

“In the past, vaccine development for dengue has focused on vaccines that represent all four different dengue serotypes inside the vaccine,” said senior author Peter Gilbert, director of Biostatistics, Bioinformatics and Epidemiology at Fred Hutch’s Vaccine and Infectious Disease Division and research professor of biostatistics at the UW School of Public Health. “Our focus was on the amino acid sequences of dengue and our goal was to see if vaccine efficacy depended on these sequences.”

Dengue, the most common mosquito-borne disease in the world, is caused by four distinct serotypes, or variant types defined by whether antibodies can neutralize the virus in a lab experiment, of dengue virus. Each serotype generates a unique neutralizing antibody response to the infection.

Before analyzing the amino acid sequences, they first determined that vaccine efficacy was significantly greater against serotypes 3 and 4 than against serotypes 1 and 2. Further exploration revealed that the viral strain for serotype 2 included in the vaccine was not well matched to the serotype 2 dengue viruses circulating and infecting humans in the efficacy trials; serotype 3 and 4 vaccine strains were better matched to the real-life circulating viruses.

“It’s the first time that anyone has really proved that you better take protein sequences seriously, not just the serotypes,” Gilbert said. “We’re breaking the mold by saying it’s not that simple. You can’t just get these discrete serological types. You have to deal with the dimensionality of the protein sequences.”

The international study also uncovered risks and issues that must be considered when developing vaccines for children. The team discovered that in older children (9-16 years), who had been exposed to dengue and were more likely to possess antibodies against many strains of dengue, the protein sequence didn’t matter. However, in vulnerable younger children (2-8 years), who face mortality or serious morbidity caused by dengue, the vaccine failed in a protein-sequence-dependent manner against serotype 4.

“If we want to get vaccines licensed for 2 year olds, we’ve really got to take the bioinformatic optimization of the strains seriously,” Gilbert said. “In fact, arguably no one should try an efficacy trial in younger kids unless they’ve got that issue solved pretty well.”

Lead author Michal Juraska and senior author Paul Edlefsen are both staff scientists in the Vaccine and Infectious Disease Division at Fred Hutch; Edlefsen is also an affiliate associate professor of biostatistics at the UW School of Public Health.  Collaborating institutions were Emory University, the Oxford University Clinical Trial Unit in Vietnam, the World Mosquito Program at Monash University, and Sanofi Pasteur.