Findings suggests such defective genomes exist in many classes of DNA viruses that cause human disease. 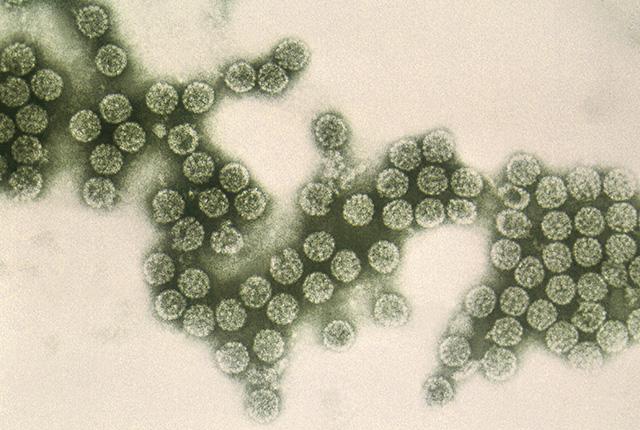 The discovery suggests that defective viral genomes may play a role in far greater range of viral infections than previously recognized.

The viral genomes have mutations that make it impossible for them to make all the proteins they need to replicate, said Dr. Alex Greninger, an assistant professor of laboratory medicine and pathology at the UW School of Medicine who led the study.

“To replicate they have to be in a cell that is also infected with intact virus so they can have access to viral proteins that they can’t make,” explained Greninger. “Essentially, they’re freeloading off the intact viruses by using their proteins.”

Amin Addetia, a Ph.D. student in the UW Molecular and Cellular Biology Program, and Quynh Phung, a research scientist in the Greninger Lab, were co-lead authors of the study, which was published in the Journal of Virology.

RNA viruses include those that cause such common infections as mumps and flu as well as polio, HIV and Ebola. SARS-CoV-2, the cause of COVID-19, is also an RNA virus. DNA viruses include major human pathogens, such as the herpesvirus, poxvirus and the adenoviruses that cause intestinal and respiratory infections. Human papilloma virus, a leading cause of cervical cancers, is a DNA virus.

Some scientists have hypothesized that defective viral genomes seen in RNA viral infections may help viruses to confuse the immune system.  This can slow down viral infections to allow them to become chronic infections that can last for years or confer some other unknown advantage to the viral invader. Some researchers are looking to see if such defective genomes might be used to interfere with viral replication and so serve as a treatment.

The UW Medicine researchers detected the defective DNA viral genomes while performing routine sequencing of viruses from patients who had received organ transplants. Transplant patients typically must take drugs that suppress the immune system. The treatment prevents the body from rejecting the organ but makes patients vulnerable to infection.

Doctors monitor the levels of these viruses in the urine of transplant patients to see if the infections have become activated. If the levels rise too high, that indicates their medications need to be adjusted.

“There’s no direct treatment yet for these viruses,” Greninger said, “but you can dial down the level of immunosuppression so the immune system can respond.”

The researchers found that in patients with very high levels of infection there was an imbalance in the viral genes being generated. This irregularity suggests that some of the genomes being produced had mutations   like those previously seen in RNA viral infections. Researchers had previously shown, almost 50 years ago, that these defective polyomaviruses could emerge when the viruses were grown in a lab dish, but they had never been seen in humans.

The exact role these defective genomes play in these infections is still under investigation, said Greninger.

“They tend to emerge when viral replication is high. This may be because they require access to a sufficient supply of the proteins to replicate,” he said. “We’ve known for a long time that the viral load of these viruses can be a biomarker for disease, so if the defective viruses are also associated with viral load, there may be a role for them in these diseases.”

“So, it’s like viruses get viruses, too,” Greninger said.

This study was supported by funding from the researchers' department.