Could robots for sex, friendship improve our aging society?

Could robots for sex, friendship improve our aging society?

Social isolation is worsening and detrimental to health. A bioethicist sees an opportunity: robot companions for seniors. 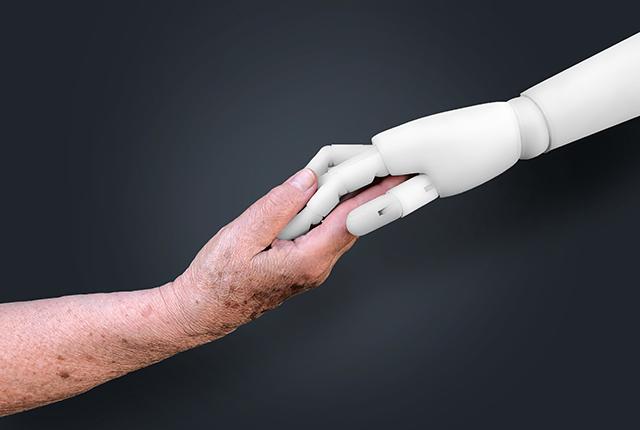 Getty Images
Among people 60 and older in the United States, 43% report feeling lonely – largely a function of social isolation.

The current U.S. marketplace for sex robots is geared to fulfilling the needs of young, white, able-bodied, heterosexual males – a population perhaps least in need of such assistance – and simultaneously overlooks a vast demographic of potential customers: senior citizens.

A newly published paper in the Journal of Medical Ethics calls out the opportunity among socially isolated, lonely people age 65 and over in aging societies, especially America.  Many of them would value a robot’s companionship and, yes, even its ability to provide sexual gratification, wrote the author, Nancy Jecker. She is a professor of bioethics and humanities at the University of Washington School of Medicine in Seattle.

“We apply ageist attitudes and negative stereotypes to older adults.  We assume they’re too old to indulge in sex and think that older adults having interest in sex is weird or dirty,” Jecker said.  “We have similar attitudes toward people with disabilities, where most research has focused on protecting them from able-bodied sexual predators instead of considering their sexual needs and desires as human beings.”

For decades Jecker has studied the aging of individuals and populations, as well as justice and other human traits and ideas. Robotics entered the picture, she said, when she recognized the declining ranks of workers to help care-dependent older adults, many of whom are physically disabled.

“Designing and marketing sex robots for older, disabled people would represent a sea change from current practice. The reason to do it is to support human dignity and to take seriously the claims of those whose sexuality is diminished by disability or isolation. Society needs to make reasonable efforts to help them,” Jecker said.

Western cultures tend to see sex narrowly as an expression of lust, and assume that people over 65, who suffer more chronic disease and disability, lose desire for physical affection, she said. This is evident in the scads of inventions aimed at seniors, which focus on monitoring health and easing physical burdens while ignoring social and emotional fulfillment.

Sexual function, Jecker’s paper argues, is an essential human value – linked to capacities for bodily integrity, affiliation, and emotions.  A sexual identity can provide a basis for self-respect, not merely physical satisfaction.

But it’s not all about sex, either.

“There’s a whole spectrum of human desires. It’s limiting to think only of sex bots or only of friend bots. Some older people want a companion that can provide both social interaction and physical affection,” Jecker said.

Among people 60 and older in the United States, 43% report feeling lonely – largely a function of social isolation, according to research published in February 2020 by the National Academies of Sciences, Engineering, and Medicine. Published in book form, the paper described how people 50 and older increasingly live alone, in many wealthy, developed societies. It summarized evidence of the detrimental health effects of loneliness and called on healthcare professionals to try to alleviate the situation.

U.S. and other Western roboticists could take a cue from counterparts in Japan, Jecker said. There, Shinto beliefs hold that spirits (kami) embody both animate and inanimate things, allowing more receptiveness to the idea of robot companions.

“They are much more open to the possibility of pet robots and friend robots. They've been at the forefront of not just the technology but the humanities questions of ‘How should we design these robots? What sort of social relationships would you want to have with them?’ They don’t share the Western roboticists’ worry that robots are mechanical empty things that we can’t relate to.”

Jecker challenges robot designers to “think in terms of robots’ capability rather than their utility – not focusing only on the sexual pleasure that a robot gives to an older, disabled adult, but focusing on what the robot enables the person to do and be.”