The bacterium, Campylobacter coli, is one of the most common causes of diarrheal illness. New strains resist two drugs commonly used in treatment. 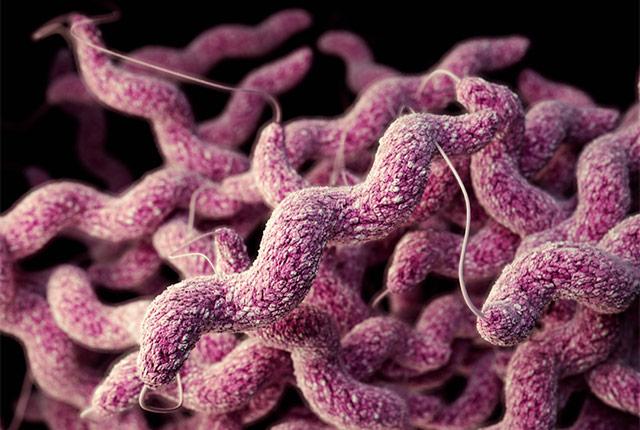 U.S. Centers for Disease Control and Prevention
A computer-generated image of a cluster of drug-resistant, curlicue-shaped Campylobacter bacteria.

A cluster of antibiotic-resistant bacteria called Campylobacter coli has been found in men who have sex with men (MSM) in Seattle and Montreal, researchers report in a new study. A cluster is a group of strains that are very closely genetically related.

One of the bacterial strains appears to have acquired a new gene that made it able to resist antibiotics via the DNA sequences known as CRISPR, for Clustered Regularly Interspaced Short Palindromic Repeats. [Editor's note: This is different from the gene-editing technology.]  It is the first time that a CRISPR-acquired antibiotic-resistance gene has been identified in a clinical sample, the researchers said.

The journal Clinical Infectious Disease published the finding this month. The lead author was Dr. Alex Greninger, assistant professor of laboratory medicine at the University of Washington School of Medicine.

Bacteria acquire CRISPR sequences from infecting viruses called bacteriophages, which insert fragments of DNA into bacterial genomes. In this case the CRISPR sequence appears to have included the drug-resistance gene.

Campylobacter is one of the most common causes of diarrheal illnesses worldwide. Infections can be severe, causing severe abdominal pain, bloody diarrhea and fever. Campylobacter sickens about 1.3 million people in the United States annually, according to the Centers for Disease Control and Prevention.

The researchers also examined a global database of enteric bacteria genome sequences and found additional isolates from around the world that, among 20- to 40-year-old individuals, were enriched in the same clusters.

Over the past seven years, approximately 400,000 enteric bacterial isolates have been sequenced by state and federal public health authorities. The report is one of the first published examples in which the NCBI Pathogen Detection database has been used to track bacterial clusters.

“Enteric infections can be sexually-transmitted infections,” Greninger said. “The international spread of related isolates among MSM populations has been shown before for Shigella, so it makes sense to see it in Campylobacter, as well.”

While most patients recover from Campylobacter without treatment, severe cases and cases involving frail or medically vulnerable people are typically treated with antibiotics. The new strain, however, is resistant to both of the antibiotics routinely used to treat Campylobacter infections, the researchers report.

Research colleagues on the paper were Amin Addetia, a technician in Greninger’s lab, Dr. Ferric Fang, a UW professor of laboratory medicine, and Christiane Gaudreau and Sadjia Bekal of the University of Montreal.

The standard treatment of Campylobacter enteritis has relied on classes of antibiotics called macrolides and fluoroquinolones. It has not been established which alternatives would work best, Fang noted. A drug called fosfomycin, which is unrelated to the standard drugs used, has been suggested as an alternative, but fosfomycin-resistant Campylobacter strains have already been reported.

MSM are at higher risk of contracting multidrug-resistant intestinal pathogens because of sexual practices that expose them to intestinal bacteria and because as a group they are more likely to have taken antibiotics to treat sexually-transmitted infections.

Sexually-transmitted Campylobacter infections among MSM may be more common than is recognized, as samples are not routinely sent to public health laboratories for identification and drug susceptibility testing, the researchers noted.

“The global emergence of multidrug-resistant enteric pathogens in MSM poses an urgent public health challenge that may require new approaches for surveillance and prevention,” they wrote.

Funding for this work was supplied by the UW Department of Laboratory Medicine.