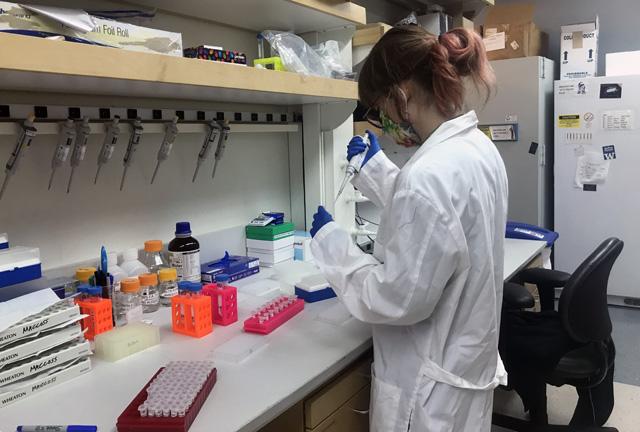 A major scientific effort is underway to characterize the proteins in the cerebrospinal fluid to improve diagnostics and clinical monitoring assays, and discover potential therapies, for Alzheimer’s disease.

Several research labs at the University of Washington School of Medicine and Stanford University are pooling their protein science expertise in this program.  Their area – proteomics -- is the large-scale analysis of proteins, including their abundance, structure, and function in a biological system. They are eager to apply recent advances in this growing field toward improving our ability to monitor disease and response to treatment for Alzheimer’s disease patients.

Dr. Michael MacCoss, professor of genome sciences and one of the principal investigators, said, “This is a perfect example of basic scientists working with clinicians and clinical chemists to bring technologies developed in basic science departments like Genome Sciences to improve patient care.”

Alzheimer’s disease is an unrelenting neurological condition that clouds the memory and takes away thinking and reasoning abilities.  Symptoms usually emerge late in life, but the disease could have been silently harming the brain for years, if not decades, beforehand.

People with the disorder produce abnormal aggregation and misfolding of certain proteins in their brain cells, and may have other cell-harming traits.  The new proteomics program is studying proteins and particles that may be implicated in Alzheimer’s disease, without deeply probing the living brain, by examining cerebrospinal fluid.

“The ultimate goal,” MacCoss said, “is to find biomarkers that can be sampled in a less invasive way and that can be monitored more regularly, such as during a doctor’s appointment.  But because the cerebrospinal fluid is the proximal fluid to the brain we are starting there.'

Earlier Alzheimer’s research has shown that cerebrospinal fluid from patients can contain biomarkers of several pathological changes in the brain:  deposits of amyloid and tau, degeneration of neurofibrils, and injury to neurons.  Clinical testing for cerebrospinal fluid markers in Alzheimer’s patients has been limited, however, because of the lack of successful therapies for modifying the disease.

“It is kind of a chicken or the egg problem,” the researchers said. “You need to identify people who will be likely to get Alzheimer’s disease before you can provide treatments to minimize their risk of getting dementia.”

Still, much more is expected to be learned about potential markers, and what they can tell about the disease: its stages, its detection, its progression, its response to potential therapies and perhaps even new ideas for treatment.

How does evidence of brain cell damage from Alzheimer’s enter the cerebrospinal fluid?This fluid is protected by the blood-brain barrier and has contact with brain interstitial fluids, which ooze through the tight, twisted spaces between brain cells and tiny blood vessels.  Like a narrow, winding stream, it can float secretions, debris and other materials to the cerebrospinal fluid.

The Alzheimer’s translational research program has been given access samples of this fluid from patients agreeing to scientific use of their specimens,

along with their clinical data, all of which have been de-identified to protect privacy.  The samples include specimens from healthy controls, and from people with mild cognitive impairment, Alzheimer’s disease, Parkinson’s disease, and Parkinson’s disease dementia.  A large enough sample size, representing many different patients, and stages of illness and dementias caused by various diseases, is needed to validate findings.

“We want to not only be able to diagnose those who will likely get dementia, but also those who have Alzheimer’s disease or Parkinson’s Disease dementia,” the researchers noted.

In addition to its administrative core, headed by MacCoss, the program has a clinical resource core, led by Kathleen Poston, a neurologist and neuroscientist at Stanford; an affinity reagent characterization core, led by Hoofnagle; and a statistical analysis and data dissemination core, headed by MacCoss and Lu Tian, associate professor of biomedical data science at Stanford.

The projects and cores interweave for a common goal:  bring state-of-the-art proteomics technologies

closer to clinical applications in precision medicine.  The program also will collaborate with Accelerating Medicine Partnership, the Alzheimer’s Disease Centers and others on scientific developments that may benefit patients.

The datasets, protocols and methods for protein assays, cellular and subcellular mapping of proteins, affinity reagent discoveries, and additional findings, will be made available worldwide to assist Alzheimer’s disease researchers.

The UW Medicine and Stanford researchers noted, “We hope that the application of new technologies, development of new reagents, creation of new clinical assays, and the dissemination of data and protocols will accelerate neuroscience in the field of Alzheimer’s and related dementias.”