Bioethicist argues against paying workers to get vaccinated

Bioethicist argues against paying workers to get vaccinated

For some people, offers of gifts and cash will be ‘undue inducements’ that challenge their personal autonomy, the author writes. 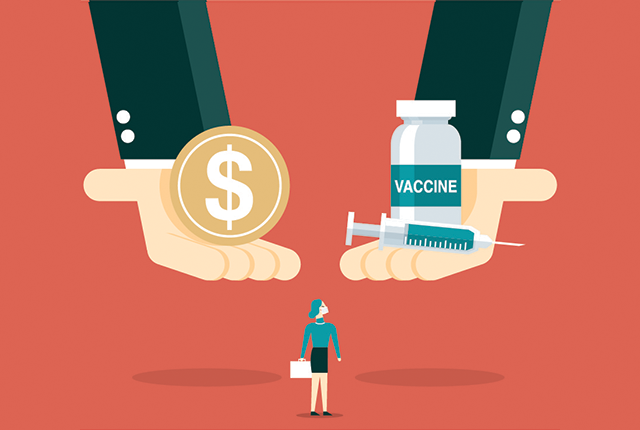 Getty Images
An offer of payment might prompt workers' suspicion that the vaccine is more risky than they are being told, Nancy Jecker said.

In trying to make stores and workplaces COVID-19-safe, some U.S. employers have cajoled workers with cash incentives to get vaccinated. Kroger, for example, offered $100 to its grocery staffers, while the Houston Methodist health system held out $500 to each of its 26,000 employees. Californa’s Bolthouse Farms is offering $500 to help overcome anticipated vaccine hesitance among its mostly Latino staff.

Such enticements serve the companies’ bottom lines, no doubt, but they also seem to aid public health efforts toward herd immunity, and in many cases would boost incomes of people who could really use cash right now.

However well intentioned, these inducements have lamentable features that eclipse their upsides, writes Nancy Jecker, a bioethicist at the University of Washington School of Medicine. Her analysis was just published in the Journal of Medical Ethics.

Jecker wholly supports the Centers for Disease Control and Prevention’s guidance that employers reimburse workers for travel and time off needed for vaccination. Any payment offer beyond reimbursement, though, raises a red flag, she said.

“We need to be asking: Are these inducements fair to different groups in society? Are they coercive? Do they respect people’s reasons for not wanting to be vaccinated?  A shot in the arm is a medical procedure for which we require informed consent out of respect for patient autonomy,” Jecker said. “We don't pay people to get other medical procedures.”

Her main concern, she said, is “undue inducement” that would violate patient autonomy. A $500 payment might not be an undue inducement for a highly paid physician, but it might for a custodian or cafeteria worker.

“For the most economically disadvantaged, payment would be the most coercive,” she said.

Scant research evidence indicates that cash incentives and gifts will change people’s minds about being vaccinated.

“It really is an empirical assumption for which data is lacking,” Jecker said. “But we do have good evidence, consistent over time, that vaccine refusers are influenced by conversations with their healthcare provider that frankly discuss benefits and risks. So we should be having conversations instead.”

In February, the Society for Human Resource Management published results of a 1,000-person survey whose findings included this factoid: Among people who did not plan to get a COVID-19 vaccine, 70% said no amount of financial incentive would persuade them to do so; 24% said cash or a stipend might change their mind.

Of the finding, Jecker said it would be illuminating to know the income levels of the 24% who expressed willingness to be vaccinated for pay.

Her paper also points to ways that employers’ cash incentives might backfire: In one scenario, an offer might prompt employees’ suspicion that the vaccine risk is higher than they are being told. In another scenario, the offer of cash now gives rationale to employees’ expectations for regular payments if it turns out that SARS-CoV-2 vaccines are needed annually, as with influenza.

“There are lots of reasons why people are reluctant,” Jecker said. “I think doubts about the vaccine will diminish over time as people see others they know get vaccinated. In any case, while it’s important to get shots in arms, it’s also important to do so way that is fair and respectful to all the groups in our society.”