Atlas profiles gene readout of every cell type in roundworm

Atlas profiles gene readout of every cell type in roundworm 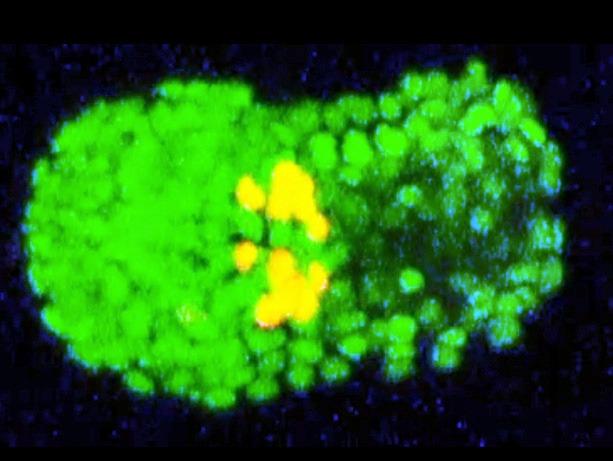 Waterston Lab/UW Medicine
Cells dividing in an early life stage of the roundworm.

The roundworm stars in the first-ever compilation of gene readouts in every kind of cell in an animal. The readouts, which were taken at a particular stage in the worm's life, reveal, for example, which genes are turned on or off in each cell.

Nearly all the cells in an individual contain the same genes. This set of genes was determined at the moment of fertilization, when the individual was just one cell. Along the routes of multiple cell divisions, the body eventually becomes composed of different cell types.

Each cell type has its own selective activation of parts of the individual's genetic code. Those gene off/gene on patterns largely account for the myriad of shapes, properties, and functions of the many specialized cells in a human or animal body.

UW Medicine researchers wanted to create a resource for getting at the reasons behind the wide cell variety within the same organism. They devised strategies to barcode and index large numbers of single cells and single molecules. Their goal was to measure the molecular state of each cell and cell type in the roundworm.

The senior scientists on the project were Robert Waterston, professor and chair of the Department of Genome Sciences at the University of Washington School of Medicine; Cole Trapnell, UW assistant professor of genome science; and Jay Shendure, UW professor of genome sciences and a Howard Hughes Medical Institute investigator. The lead scientists were UW School of Medicine graduate students Junyue Cao and Jonathan Packer.

Read their paper in Science.

The research group uniquely labeled the full genetic readouts from many cells or their nuclei. The nucleus acts as the central management office of the cell.

The genetic readouts show which segments of DNA code are being copied by the cell via RNA. The collection of RNA copies, or transcripts, is called the transcriptome. They become the set of directions for protein production or other cellular activities.

The researchers applied their profiling strategies to a larval stage of the nematode Caenorhabditis elegans. This roundworm already has the distinction of being the only multicellular organism that has had all its cells and cell types, and the entire developmental lineage of these cells, put on record.

This nematode also has comparatively few cells. During its larval stage, it has 762 to be exact, not including reproductive cells. Unlike many other animals, every nematode larva has the same number of cells.

It is also a popular worm for genetic studies and for research on how living things start to form after conception, then grow and pass through life stages to old age.

Until recently, there's been no way to comprehensively classify all the cells in an organism based on gene activity. Methods had been developed to look at gene activity in individual cells.

"We can now do this experimentally for tens of thousands of cells at a time," Trapnell said.

The researchers started with a technical control to see if they could quickly separate human from mouse cells.

They moved on to measuring, for the first time, all the genes in all the cells of a whole animal in a single experiment.

"Our hope is that this resource will markedly accelerate efforts by biologists to reveal new fundamental principles on how animals form and develop," Trapnell said, "and that this work in worms becomes a stepping stone toward better understanding of human development.

The study also showed, he said, "how incredibly specialized neurons [nerve cells that process and relay information] can be. There were some rare neuronal cell types represented by only one or cells in the worm. "

He anticipates that atlases such as the one his team produced will lead to vigorous debates on cell re-classification.

Future research, he said, will likely look at how the whole-animal transcriptome changes as the animal grows, and what controls those changes, as scientists conduct this type of experiment along a range of developmental stages.

As for forecasts on similar experiments to obtain a comparable atlas for the mouse or human body, Trapnell said the obstacles will not be so much in the indexing strategy, but in obtaining the samples. Mice and humans don't contain a pre-determined number of cells. Also, anatomically processing an entire, complex organism to gather all types of cells also will be a challenge.

An advantage of their method of single-cell combinatorial indexing RNA sequencing, or sci-RNA-seq for short, is speed. A library profiling the transcriptomes of tens of thousands of single cells per experiment can be completed by one person in two days. The cost ranges from 3 cents to 20 cents a cell.

Hypothetically, the researchers estimate, a researcher could eventually profile the transcriptomes of more than 10 million cells in one experiment.

The researchers wrote that they see their data as a starting point for an atlas that builds upon the Nobel-prize winning cell lineage map of C. elegans created by Britain's John Sulston and that would indicate the molecular state of every cell throughout the life cycle of this important nematode.

The scientists have made the raw data available for other labs on the Gene Expression Omnibus, and have provided online examples of how to work with the data via a Jupyter Notebook.

Here is the cell atlas of the worm.