Part of the Tissue Chips in Space program, this study will measure how microgravity affects human heart muscle 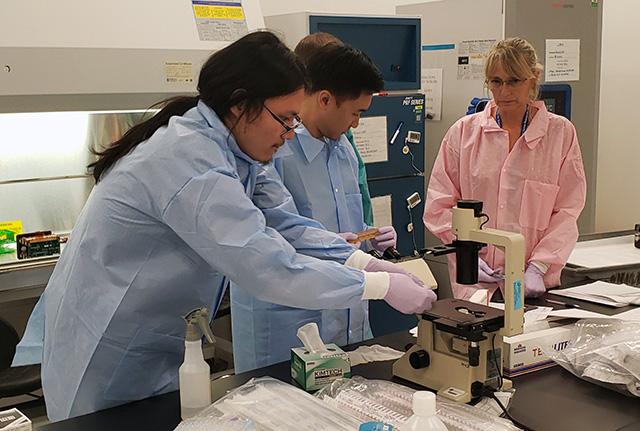 Note to editors and reporters:  Live coverage on NASA Television of the SpaceX CRS-20  cargo launch carrying this experiment  is scheduled at 8:30 p.m. EST, 11:30 p.m. PST March 6 and will be replayed twice on March 7. Coverage of the rendezvous with the International Space Station will be at 5:30 a.m. EST Monday, March 8, with installation at 8:30 a.m. All times are subject to change due if weather  or launch conditions are unfavorable

Space exploration can take a toll on the human heart.  Astronauts are at risk for changes in their cardiac function and rhythm. To learn how microgravity and other physical forces in space exact their effects on heart muscle, a Tissue Chips in Space project has now been packed and is awaiting launch to the International Space Station.

The experimental equipment consists of small, compact devices, a little bit larger than cell phone cases.  The holders contain a row of tiny, 3-D globs of beating heart tissue grown from pluripotent stem cells, generated from human adult cells.  The heart muscle tissue is supported between two flexible pillars that allow it to contract freely, in contrast to the rigid constraints of a Petri dish.

The devices also house a novel invention from the University of Washington.  It automatically senses and measures the contractions of the heart tissues, and reduces the amount of time the astronauts will need to spend conducting this study.

The flexible pillars contain tiny magnets, explained UW graduate student Ty Higashi, one of the inventors.   When the muscle tissue contracts, the position of the embedded magnets changes, and the motion can be detected by a sensor, he said. That information is then sent down to a laboratory on Earth.

This model will recapitulate, on a miniature scale, what might be happening to the architecture and function of heart muscle cells and tissues in astronauts during a space mission.

The project head is Deok-Ho Kim, a professor in bioengineering, who recently joined the Johns Hopkins University faculty in Baltimore. He and co-investigator, Nathan Sniadecki, a professor in mechanical engineering, began this study two years at the UW Medicine Institute for Stem Cell and Regenerative Medicine (ISCRM). Jonathan Tsui, a postdoc in bioengineering, Ty Higashi, a graduate student in mechanical engineering , and other members of the UW project team, continue the cross-country collaboration in Seattle.  The team is working with several NASA and National Institutes of Health groups, and researchers at other universities, on this effort.

Sniadecki said that each of the tissues heading to the International Space Center contain about a half million heart cells.

“They act like a full tissue,” he explained. “They contract, they beat and you can actually see them physically shorten in the dish. We’re actually able to see little heart beats from these tissues.”

The SpaceX shuttle delivering this scientific payload is expected to leave from Cape Canaveral no earlier than 8:50 p.m. PST (11:50 p.m. EST) Friday, March 6.  The exact departure schedule depends on the weather and other factors.

Once on board, the experiment will run for 30 days before being returned to Earth for further analysis.  A related space-based experiment will follow skyward later, to see if medications or mechanical interventions can offset what the heart muscle endures during extended space missions.

“The space program is looking at ways to travel longer and farther,” Sniadecki said.  “To do so, they need to think about protecting their crews.   Having treatments or drugs to protect astronauts during their travel would make long term space travel possible.

“Guarding against cardiac problems would be especially critical during space travel at distances never attempted before, such as a mission to Mars,” said Sniadecki. “This opportunity to really kind of push the frontier for space travel is every engineer’s dream.”

He added, “We also hope to gather information that will help in preventing and treating heart muscle damage in people generally, as well as in understanding how aging changes heart muscle.”

Microgravity is known to speed up aging, and likely influence other cell or tissue properties. Because aging is accelerated in space, studies on the International Space Station is a way to more quickly assess this process over weeks, instead of years.

“I think the medicine side of it is extremely helpful on Earth, too, because what we discover could potentially lead to treatments for counteracting aging,” Sniadecki said.

This space medicine research project is funded by the National Center for Advancing Translational Sciences and the National Institute of Biomedical Imaging and Bioengineering. This heart tissue study is part of the national “Tissue Chips in Space” program.