Patients have treatment options that clinicians should employ, says the study’s lead author. 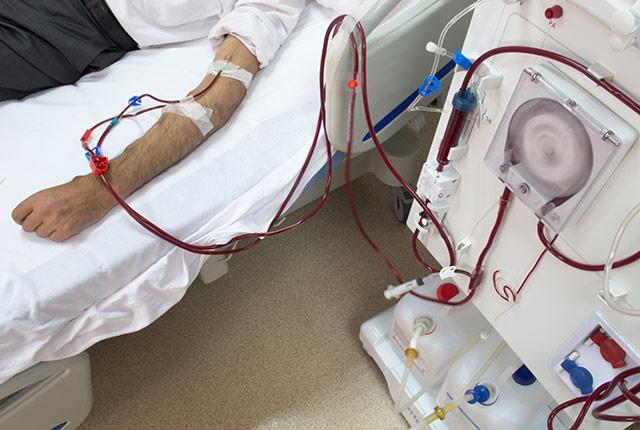 For almost 50 years, hemodialysis has extended lives of people with chronic kidney disease. But when a patient first learns that their kidneys have failed and dialysis is necessary to survive, it can be a jolting overture of mortality.

These patients usually have lived for years with diabetes or hypertension – diseases onerous for their medication regimens and lifestyle constraints. Adding dialysis, a four-hour, thrice-weekly therapy, can easily push patients into depression if they don’t already have that diagnosis.

With this backdrop, researchers report today that two treatments, cognitive behavioral therapy (counseling) and the drug sertraline, effectively reduce depression among people undergoing maintenance hemodialysis. The study was published in the Annals of Internal Medicine.

“Sertraline was slightly more effective but both treatments seemed to work for this population,” said the study’s lead author, Rajnish Mehrotra, professor of medicine (nephrology) at the University of Washington School of Medicine. “Physicians should select the treatment that is available and acceptable to the patient, recognizing that each comes with its own burdens: Cognitive behavioral therapy needs to be given once a week for 10 sessions, and sertraline is a daily pill that has a higher risk for adverse events such as nausea and dizziness.”

The randomized, controlled trial included 184 kidney-failure patients at 41 dialysis facilities in three U.S. metropolitan areas. All had been screened and identified to have depression.

The trial was conducted in two phases: first, to determine the effect of an “engagement interview” on patients’ acceptance of an offer of treatment, and second, to compare the efficacy of the two therapies.

Half of the patients were randomly assigned to receive an engagement interview in which the patient’s depressive signs were more fully explored and discussed; the other half received a simplified statement of their depression diagnosis and an offer of treatment.

“I was surprised by how many people accepted treatment,” Mehrotra said, contrasting the finding with earlier research in which, by his calculation, only 17 percent of patients on dialysis and diagnosed with depression had opted for treatment.

Those patients amenable to treatment were randomly assigned to 10 cognitive behavioral therapy sessions over 12 weeks (delivered during dialysis sessions) or prescribed daily sertraline for 12 weeks.

The median age for people starting dialysis is 62, and a disproportionate number of dialysis patients represent racial and ethnic minorities, Mehrotra said. “Overall this is a socioeconomically deprived population in terms of educational attainment, family income and opportunity to advance.”

The number of people with end-stage renal disease also is increasing.  Today upward of a half-million Americans receive hemodialysis to cleanse their blood of impurities normally filtered by their kidneys.

Existing literature indicates that, at any time, nearly one in three such patients meets clinical criteria for depression. Many, though, receive no care for the condition.

Mehrotra attributes the shortfall to three things: a lack of recognition and diagnosis by healthcare providers; patients’ reluctance to acknowledge feelings of depression because of the condition’s persistent stigma; and the dearth of quality data, to date, that treatments for depression in the general population are effective among this patient population specifically.

The Centers for Medicare and Medicaid Services addressed this situation in 2016 when it started requiring Medicare patients who receive dialysis to be screened annually for depression.

On whom that directive falls has been a source of uncertainty and tension, Mehrotra acknowledged.

“Many dialysis patients have no primary care doctor, and we nephrologists have not been trained in how to treat people for depression and/or make those treatments available. I think we’ll have to get out of our comfort zone in that way.”

The study received funding from the Patient-Centered Outcomes Research Institute, the Dialysis Clinic Inc, and the Kidney Research Institute (a collaboration of UW Medicine and Northwest Kidney Centers in Seattle).

Ganglion cells created in mice in bid to fix diseased eyes
COVID vaccine ideas may have better variant resilience
UW Medical Center is 1st in U.S. to earn nursing distinction
To improve a promising cancer drug, cut it in half
Transparency, amnesty may boost reports of sexual violence
END_OF_DOCUMENT_TOKEN_TO_BE_REPLACED