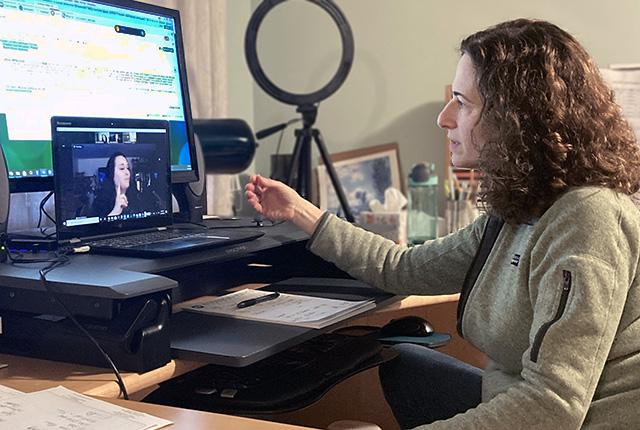 Hospital safety policies spurred by COVID-19 could have left Seattle opera singer Debra McKinney to do little but fret over her persistent hoarseness. Therapy to retrain someone to sing requires a clinician to see a patient’s mouth in motion. That’s impossible when the patient is masked.

Thanks to telemedicine, though, McKinney has had several sessions with Juli Rosenzweig, a speech language pathologist with UW Medicine’s ear, nose, and throat service. For 20 years she has helped folks of all ages and walks of life to overcome deficits involving voice, swallowing, and breathing.

For example, in fall and winter, Rosenzweig often counsels neophyte schoolteachers who are struggling to project their voices to classrooms’ back rows and straining throat muscles not normally involved in voice production. The upshot is hoarseness and pain. This year, Rosenzweig said. the clinic also is seeing veteran teachers with vocal fatigue from countless hours of planning and recording online coursework, in addition to delivering it, because of the pandemic.

McKinney endured a hellish 2019. The 36-year-old soprano had multiple episodes of pneumonia followed by the discovery and removal of a benign lung tumor, all of which kept her from singing. By August 2020 she had recovered, only to realize that high notes had become inaccessible.

“It was very difficult to reach my high range, and it’s getting easier between each (therapy) session as far as speaking, singing. I think my speaking voice is actually a hair higher than when I first started,” McKinney said.

Rosenzweig described McKinney’s condition as vocal fold weakness on one side. It led to muscle tension dysphonia – compensatory muscular strain – which caused hoarseness. “We’re trying to retrain her coordination of voicing and breathing, and optimize her resonance, so her voice works properly without strain.”

Telemedicine sessions allow Rosenzweig to “see tension patterns in people's bodies,” she said. “I can show them examples of how to breathe. I can teach them laryngeal self-massage.”

The clinic’s embrace of the technology also enables UW Medicine speech pathologists, for the first time, to provide follow-up therapy for patients far from Seattle. For example, a Spokane resident who comes to Seattle for throat surgery typically would be directed to a Spokane specialist for postoperative care.

“With telemedicine, we can see these patients. We’re covering the entire state now,” Rosenzweig said. She added that most Seattle-area patients are elated, as well, to avoid the drive to the clinic and the hunt for parking.

The Otolaryngology Clinic also has started a Performing Voice Program, committing to a 24-hour turnaround on access to a multidisciplinary team, including a laryngologist and a speech pathologist, for people whose voice is their livelihood and who have sustained an acute injury.