Syphilis may be transmitted through semen, study suggests

Syphilis may be transmitted through semen, study suggests

In most cases, transmission is thought to occur through contact with genital sores. 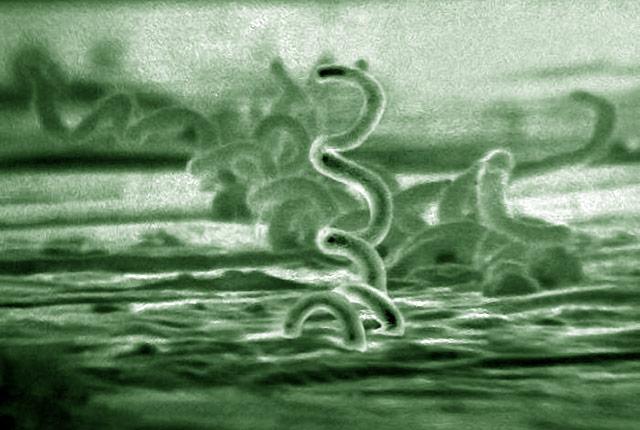 U.S. Centers for Disease Control and Prevention
Syphilis is caused by the spiral-shaped bacterium Treponema pallidum.

The bacterium that causes syphilis, Treponema pallidum subsp. pallidum, can be present in semen at high enough concentration to transmit the disease, suggests new research led at the University of Washington School of Medicine. The paper was published in the journal Sexually Transmitted Diseases.

In most cases, people contract syphilis from contacting genital sores of an infected individual.  The question of whether the bacteria could also be spread via semen has been debated, said the principal investigator, Lorenzo Giacani, a UW associate professor of medicine (allergy and infectious diseases).

“This uncertainty was puzzling because we know T. pallidum is a highly invasive pathogen that is thought to be able to invade virtually every organ of the body, and be found even in tears, according to a recent paper. But there was, and still is, a lack of sufficient experimental evidence that viable T. pallidum could be found in the semen,” he said.

Research done in the early 20th century suggested semen could carry T. pallidum and that the fluid could play a role in disease transmission, but a series of experiments reported in 1942 by Harry Pariser, then the assistant surgeon of the U.S. Public Health Service, challenged those studies' findings.

In experiments, Pariser tried unsuccessfully to infect animals with semen from patients with syphilis. He concluded that semen was not involved in the spread of the bacteria . This conclusion has generally gone unchallenged.

Giacani, working with colleagues at the San Martino University Hospital in Genoa, Italy, obtained semen of three men infected with syphilis (prior to their receiving treatment) and tested the samples for the presence of T. pallidum DNA and RNA. Their urine was also tested to make sure the semen was not being contaminated during its passage through the urethra. Steps also were taken to ensure the semen did not contact any syphilitic sores.

The researchers found T. pallidum DNA and RNA present in the semen of one of the three men. The sample indicated that the man’s semen contained about 800 T. pallidum cells per milliliter, a level many times more than necessary to spread the infection, Giacani said.

In this instance, unfortunately, it was not possible to isolate the bacteria from the semen because of the way the samples were preserved, he added, but the high level of RNA present in the sample strongly suggested that the bacteria were viable and metabolically active at the time of sample collection.

Giacani cautioned that, given the study's small size, further research is needed to confirm his findings and to determine the role T. pallidum in semen may play in the spread of syphilis.

“Transmission through semen may be quite rare compared to more canonical ways,” Giacani said. “Nonetheless, you should not feel safe just because a sexual partner that you do not know well doesn’t have any genital lesion. At the same time, anyone who experienced a genital lesion possibly due to an infection like syphilis should not assume they are no longer infectious simply because the lesion healed spontaneously. Just because you don’t see a lesion, you should not assume you are not at risk of exposure to a pathogen.”