Formerly conjoined twin Charity Gutierrez-Vazquez has given birth at UWMC, where she and her sister were born in 2000. 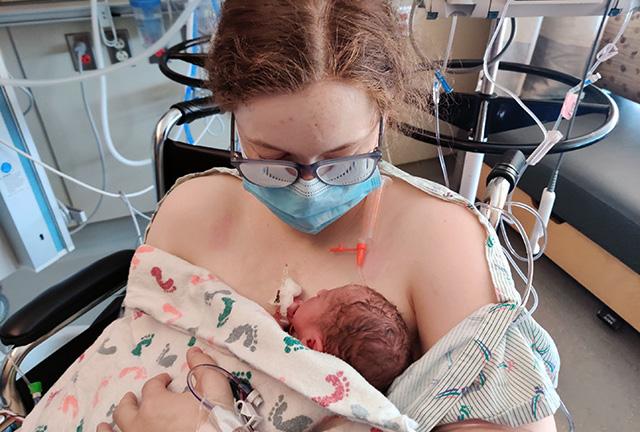 It’s not uncommon for a woman to receive maternity care at the same hospital where she was born.  But for Charity Lincoln Gutierrez-Vazquez, 21, giving birth to her daughter Aug. 12 was the second time she made medical history at University of Washington Medical Center.

When Charity’s mother, Veneice Lincoln, was pregnant, her physicians told her and her husband Greg that the twins she was carrying were conjoined.  As her pregnancy progressed, she learned Charity and her sister Kathleen were likely attached in an extremely rare way.

The twins were delivered Feb. 21, 2000, by Dr. Wendy Atkinson, then an assistant professor of obstetrics and gynecology specializing in maternal and fetal medicine. UW Medicine obstetrician Dr. Edith Y. Cheng, an expert in high-risk pregnancies, oversaw the twin’s birth, which was by Caesarean section.

The newborn conjoined twins were taken to the UWMC Neonatal Intensive Care Unit, where neonatologist Dr. Peter Tarczy-Hornoch, an assistant professor of pediatrics at the time, led their care. They went home 10 days later.

The babies were joined at the sternum – the chest bone between the ribs – and shared several internal organs intertwined in their abdomens. Each child had her own pelvis, but their pelvic rings were open and fused.

“Our goal was to give each of the girls an individual life,” Waldhausen said

The separation surgery was followed by several more procedures over the years as the girls grew.

Charity and her family kept in touch with Waldhausen.  When she and her husband Ruben found out they were expecting a baby, they told him the news.  He expressed some concern about her reconstructed abdomen being able to support the pregnancy and referred her to a UW Medicine

obstetrician and perinatal medicine expert. Cheng was the same physician who had provided guidance in the operating room when Charity and her sister came into the world.

Nearing thirty-four weeks gestation, Charity was scheduled for a Caesarean section, or surgical delivery of her baby. Her delivery was led by Cheng, who is now the medical director of the Maternal and Infant Center at UWMC. Dr. Nick Burns, a UW Medicine fellow in maternal and fetal medicine, assisted.

In preparation for Charity’s delivery, Cheng consulted with specialists on her care team, which comprised up to 15 people. Among them were obstetrical anesthesiologists from the Department of Anesthesiology and Pain Medicine.

Cheng’s plan was for a classic C-section.  Baby Alora was born at 9:03 a.m. PDT, Thursday, Aug. 12 with no complications.

“It couldn’t have gone any better for Charity and her baby Alora,” Cheng said, “I felt a huge responsibility and honor to deliver Charity’s baby. I learn so much from my patients and this was one of my highlights that will stay with me forever.”

Earlier in her hospital room, Charity had said, “I’m grateful to be in such good hands and am confident in my medical team. My mom had us here, and I feel I’m coming full circle.”

Videos of Charity as an infant heading into separation surgery show her brave, calm expression. Charity’s courage and faith were once again evident as she was wheeled to a UWMC operating room for delivery.

The nurse transporting her expressed her joy: “You’re going to be a mom today!”

Not too long afterward, baby Alora was welcomed into the loving arms of her mother and father.

As of this writing Charity has been discharged from UWMC. Baby Alora is doing well at the UWMC Maternal and Infant Care Center and should be home with her parents soon.

The Olympian, Feb. 2018:  Catching up with the Lincoln twins | The Olympian