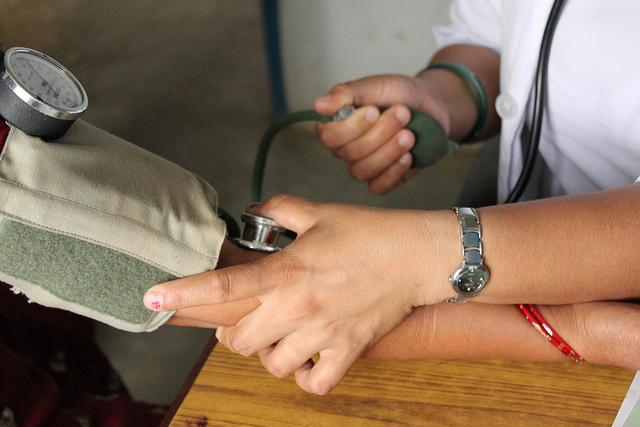 Measuring someone’s blood pressure for signs of hypertension is the most common clinical procedure. So it was alarming to read that just one of 159 medical students earned a perfect score in blood-pressure tests with actor-patients, according to a study published this month.

“To be fair, the 11-step skills test they used seemed a bit overly strict to me. For example, students got marked down if they measured BP over someone’s clothing, yet we know that measuring BP over a light shirt doesn’t make any difference. The other consideration is that a lot of first-year students haven’t done much hands-on training; more often they’re getting class instruction.”

By contrast, Thompson said, UW School of Medicine first-years are “in primary-care doctors’ offices from Day 1.’’

Clinicians’ ability to administer a BP test may mean less in our automated future. Thompson was part of a 2014 study in Yakima in which 80 percent of patients were comfortable having BP taken by kiosks in clinic waiting rooms, like the ones at drugstores. Those kiosks also gave medical assistants more time for other work.

UW Medicine, he said, is part of an ongoing Kaiser Permanente clinical trial comparing accuracy of BP measures taken by clinicians, at kiosks, and by 24-hour home monitors – currently the “gold standard” test.  Said Thompson: “I think we’ll find much more that BP measures are taken (in the future) with monitors in the patients’ homes and then are seamlessly transmitted to the clinic.”