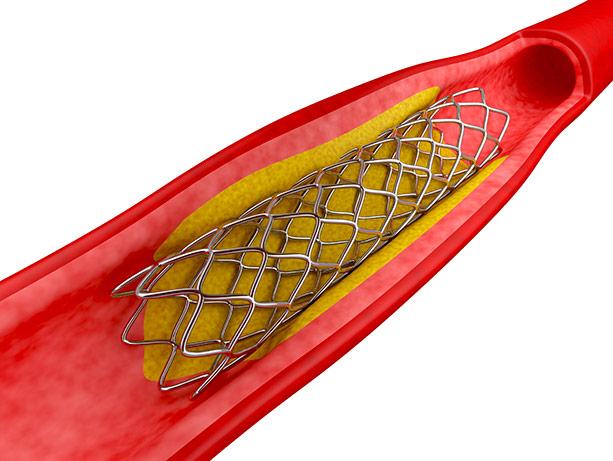 ThinkStock
An illustration of a stent creating space for blood flow within a blocked vessel.

A provocative study and accompanying commentary in The Lancet last week is drawing fierce rebuttals from cardiologists.

The study was the first randomized trial to compare two groups of people with a blocked heart vessel and chest pain: one group, 90 people, got medication plus a sham procedure (to pose a potential placebo effect); the other group of 104 people got stents, narrow tube-like scaffolds implanted via a catheter in blocked arteries to create space for normal blood flow.

The study’s main comparative measure was the change in duration (pre-care to post-care) that subjects were able to exercise on a treadmill. By that measure, the finding of no significant difference between the two groups led commentators to declare that guidelines should be rewritten to reduce cardiologists’ use of stents, which have been employed for more than a decade with high success at restoring patients’ blood flow and activity levels.

“I think the conclusions drawn in the Lancet’s editorial are overstated,” said Dr. Larry Dean, director of UW Medicine’s Regional Heart Center and past president of the international Society for Cardiovascular Angiography and Interventions. “The notion that a 200-person study with a subjective endpoint might change patient-care guidelines is overstating the importance of the study.” (Access downloadable video of Dean's soundbites.)

Medical therapy, Dean said, is the “cornerstone” of treatment for atherosclerosis, in which plaque accumulates to halt blood flow. But stents provide an option for patients who can’t take medications or who have symptoms despite medications. (The study’s conclusions also should not be confused with treatment of patients with a heart attack, in which stents are lifesaving.)

“If a patient comes to me, is on adequate medical therapy, is asymptomatic and is active, there would be no reason to place a stent,” Dean said. In fact, almost 30 percent of the patients who received a stent in the trial would not have gotten one in routine clinical practice, he said, because the measured severity of their blockages did not call for it.

“Where it gets sticky is when there’s evidence of residual ischemia (inadequate blood supply to the heart) despite medical therapy. That was a secondary endpoint in the trial, and the stented patients did better than the group that got medical therapy only.”

The study’s narrow criteria for subjects also limit its broader applicability, he suggested.

“Single-vessel disease, maximally treated with medical therapy, and doing well otherwise; a future study would want to be more representative of the real world. These subjects were getting called by a cardiologist a couple times a week to titrate their medications up. In the real world, that is very difficult to do.”

“It’d be erroneous for patients to take away from this that, if you have medical therapy, you’ll never need a stent or bypass, or that it’s inappropriate to have a stent placed,” he said. Indeed, four subjects who received medical therapy during the trial ultimately needed a stent.