Who's tweeting about scientific research? And why?

Who's tweeting about scientific research? And why?

A study reveals patterns – at times disturbing – of how research is received and disseminated through social media. 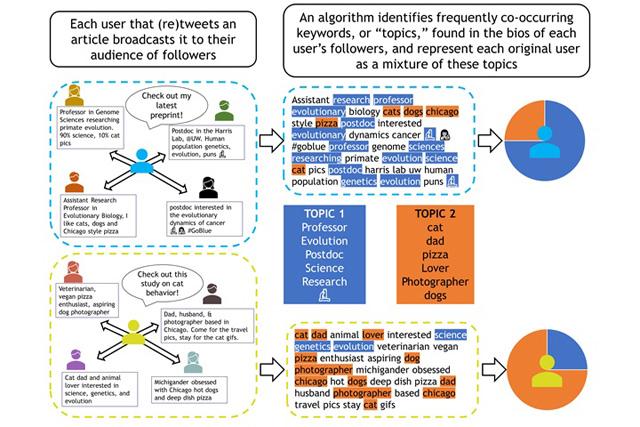 Jedidiah Carlson
This graphic illustrates how the UW Medicine social media researchers learned about an audience of Twitter users by looking at their followers.

Although Twitter is best known for its role in political and cultural discourse, it has also become an increasingly vital tool for scientific communication.University of Washington School of Medicine researchers have conducted an observational study showing that Twitter users can be characterized in extremely fine detail by mining a relatively untapped source of information: how those users’ followers describe themselves. The study reveals some exciting—and, at times, disturbing—patterns of how research is received and disseminated through social media.

The record of social media engagement by laypeople is decoded in a paper publishing Sept. 22 in the open access journal PLOS Biology.  Here is a copy of the paper, which is freely available.

Scientists candidly tweet about their unpublished research not only to one another but also to a broader audience of engaged laypeople. When consumers of cutting-edge science tweet or retweet about studies they find interesting, they leave behind a real-time record of the impact that taxpayer-funded research is having within academia and beyond.

The lead author of the study, Jedidiah Carlson, is a postdoctoral fellow in the Department of Genome Sciences  at the UW School of Medicine. He  explains that each user in a social network will tend to connect with other users who share similar characteristics (such as occupation, age, race, hobbies, or geographic location), a sociological concept formally known as “network homophily.”

By tapping into the information embedded in the broader networks of users who tweet about a paper, Carlson and his coauthor, Kelley Harris, an assistant professor of genome sciences at the UW medical school, are able to describe the total audience of each paper as a composite of multiple interest groups.  This audience analysis might indicate the study’s potential to produce intellectual breakthroughs, as well as social, cultural, economic, or environmental impacts.

Rather than simply categorizing people into coarse groups such as “scientists” and “non-scientists” that rely on Twitter users to accurately describe themselves in their platform biographies, Carlson was able to segment “scientists” into their specific research disciplines (such as evolutionary biology or bioinformatics), regardless of whether they mentioned these sub-disciplines in their twitter bios.

The broader category of “non-scientists” can be automatically segmented into a multitude of groups, such as mental health advocates, dog lovers, video game developers, vegans, bitcoin investors, journalists, religious groups, and political constituencies. Carlson cautions. however,  that these indicators of diverse public engagement may not always be in line with scientists’ intended goals…

Hundreds of papers were found to have Twitter audiences that were dominated by conspiracy theorists, white nationalists, or science denialists. In extreme cases, these audience sectors comprised more than half of all tweets referencing a particulat study. This observation illustrates the adage that science does not exist in a cultural or political vacuum.

Particularly in light of the rampant misappropriation and politicization of scientific research throughout the COVID-19 pandemic, Carlson hopes that the results of his study might motivate scientists to keep a closer watch on the social media pulse surrounding their publications and intervene accordingly to guide their audiences towards productive and well-informed engagement.

The title of the Carlson and Harris PLOS Biology paper is, "Quantifying and contextualizing the impact of bioRxiv preprints through automated social media audience segmentation"

The study was funded by  Burroughs Wellcome Fund Career Award at the Scientific Interface, a Searle Scholarship, a Pew Biomedical Scholarship. an Alfred P. Sloan Fellowship, National Institute of General Medical Sciences grant 1R35GM133428-01 and a Fred Hutchinson Cancer Research Center Translational Data Science Postdoctoral Fellowship. The funders had no role in study design, data collection and analysis, decision to publish, or preparation of the manuscript. The authors have declared that no competing interests exist.

This news release was written by Jedidiah Carlson and the PLOS Biology press office.