Myopia, or nearsightedness, manifests in the second, third and fourth grades, when young eyes are growing. 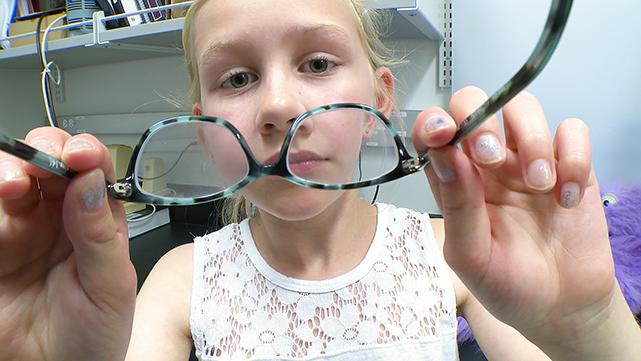 UW Medicine
Kayla Radovich, 11, is one of the children using special glasses created by UW researchers to stop her myopia.

If Kayla Radovich grew up in the wild, Mother Nature would make sure her eyes grew at a normal rate. But the 11-year-old from Edmonds, Washington, has been an avid reader since she was a toddler and is growing up as a screenager.

When she was in the first grade, her mother asked her what time is it, but Kayla responded that she couldn’t see the clock.  She got her first pair of glasses soon after. But then in second grade, Kayla failed a vision test and optometrists were changing her prescription every six months.

“Her eyes were changing so fast, it was kind of scary,” said her mother, Margo Radovich.

Kayla has high myopia or nearsightedness (not being able to see far away). Myopia manifests in the second, third and fourth grade when young eyes are growing and the eye grows too long for perfect vision.

By 2050, 5 billion people on Earth will have myopia and at least 1 billion people will have high myopia, which can lead to retinal detachment and glaucoma, according to a 2016 study in the Journal of Ophthalmology.

“It’s a global crisis,” said Jay Neitz, a professor of ophthalmology at the University of Washington School of Medicine who runs the UW Medicine Vision Sciences Center. “All these electronic things in the modern world aren’t good for you. That’s causing the epidemic. It’s all about the screen time.”

A recent PLOS One study of 10,000 schoolchildren in India shows that children who spend seven hours a week on screens triple their risk of myopia.

In East Asia, countries such as South Korea, Taiwan, Singapore, China and Japan have a prevalence of myopia of 80 to 90 percent but even the United States has reported a prevalence of 42 percent, almost doubling in three decades, according to the Journal of Opthalmology (Holden, et al).  Some underserved ethnic groups such as Native Americans and Alaskan Eskimos are particularly susceptible.

Researchers said by 2050 myopia will be the No. 1 blinding disease in the world.

Radovich is now part of a pilot study with UW Medicine testing out glasses designed to stop the eye from growing.  The glasses are designed with a special foggy grid on the peripheral vision, which makes the brain thinks a person is seeing far away and it keeps the eye from growing. Radovich hasn’t had a new prescription in a year.

“Her progression has completely been stopped,” Neitz said.

Neitz and his wife, Maureen Neitz, also professor of ophthalmology at the UW School of Medicine, have completed three proof-of-concept studies that compared the therapeutic glasses with standard glasses. They said the data shows not only are the glasses effective at stopping myopia but all the kids in their studies are still wearing them two years later.

A private company will now be launching a clinical trial to get FDA approval that the glasses prevent myopia. The glasses can be sold without FDA approval. But the researchers want the approval. The trial launched in 2017 with data available in a year.

In the long term, Neitz said gene testing will be available to pick out kids who have myopia so it can be treated early.

The good news for parents is that solutions are on their way, he said. In the meantime, Neitz said young people need to look at screens and books at a healthy distance. He recommends that parents make sure an eye test is part of the routine checkup at the doctor’s office.

Children aged 7-11 are most susceptible to myopia progression. Limiting screen time, computers, tablets and television and spending time outdoors can help prevent or slow myopia progression, he said. Researchers postulate that bright outdoor light stimulates the release of the retinal transmitter dopamine, which is known to block the growth of the eye. Also, in the outdoors, there is less visual clutter. Things tend to lie at a greater distance, providing a clearer image that helps to regulate the eye’s development.