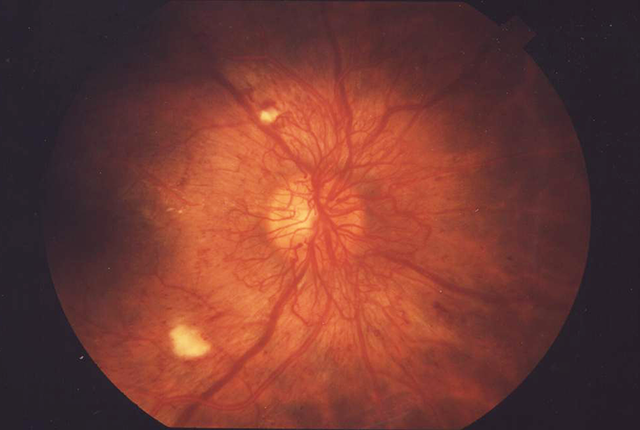 Wikimedia Commons
Past research has examined the ability of AI to discern hints of diabetic retinopathy from retinal scans such as the one above.

Ophthalmologists at the University of Washington School of Medicine will have a major role in the National Institutes of Health’s initiative to more fully realize AI’s promise to improve medical care.

The NIH Common Fund today identified the universities and institutes whose work over the next four years will set the foundation for its “Bridge to Artificial Intelligence” (Bridge2AI) program. The program’s goal is to generate flagship datasets about human health that can be used by scientists across domains of medicine. As a result, AI would have an open-source, broadly supported pathway to greater potential and impact.

“The program recognizes AI’s power to learn to recognize disease from great volumes of data, but the efforts so far have been fundamentally problematic,” said Dr. Aaron Lee, a UW associate professor of ophthalmology.

“The patient data has been narrowly focused on a few diseases, and it mainly has been retrospective — that is, collected from previous research and not adequately representative of the diverse populations we treat,” he said. “It has led to AI algorithms that are potentially unbalanced in terms of patients’ age, ethnicity, race and gender.”

He and Dr. Cecilia Lee, also an associate professor of ophthalmology, are co-principal investigators of the UW Medicine-led study arm. The NIH is funding the project with $7.8 million in its first year, the majority of which will be disbursed to participating research sites.

Using diabetes as its model disease, the consortium will aim to collect data from 4,000 participants.  The goal is to generate an AI-friendly, hypothesis-agnostic dataset, Aaron Lee said.

“We will collect and organize patient data to create a model that scientists and labs could easily extend and replicate with other disease models in the future,” he said.

The diabetes study will employ digital technologies to capture more information about how the disease is affected by patients’ activities and environments. For a two-week span, each participant will use:

“These are types of data not traditionally collected in a medical dataset, and we hope it will give us a more holistic picture of participants when they are not at the hospital,” Lee said.

To ensure the data is population-representative, the 4,000 participants will be balanced for three factors: disease severity, race/ethnicity, and sex. In the study, 1,000 participants will have no diabetes, 1,000 will have diabetes that is lifestyle-controlled, 1,000 will have diabetes that is oral medication-controlled, and 1,000 will be insulin-dependent. Each of those subgroups will be balanced between male and female and across Black, white, Asian and Latino populations.

“This is trying to get at the heart of the shortfall of AI to date, by collecting well-curated, well-balanced datasets,” Lee said. “These are intended to unlock a host of AI applications without the worry about biases being introduced by the data-collection model.”

“These worked fairly well in the screening context. There didn’t seem to be any bias in detecting disease in people of different races, but there was a decrease in performance with respect to people’s age. That is what this new project hopes to address,” Lee said. “If you don't have a well-constructed, balanced dataset, then in underrepresented groups, the AI models will tend to fail.”

This project is supported by the National Institutes of Health award number: OT2OD032644.  The project will be based at the Angie Karalis Johnson Retina Center at UW Medicine. Cecilia Lee holds the Klorfine Family Endowed Chair.  Aaron Lee holds the Dan and Irene Hunter Endowed Professorship.