In mouse tests, UW Medicine researchers are studying the technology's ability to create fissures in tumors that would allow therapeutics inside. 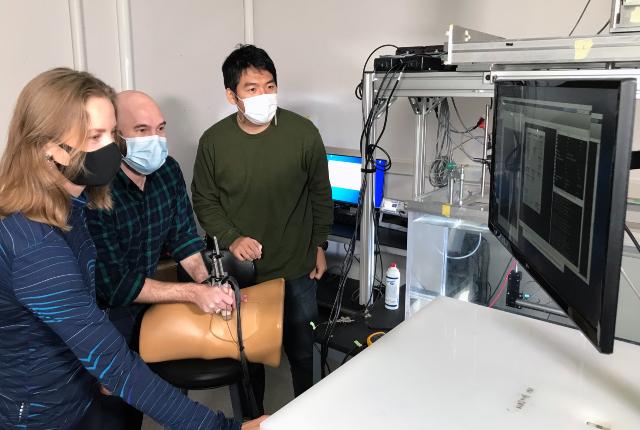 Pancreatic cancer, aside from being notoriously undetectable in its early stages, is also hard to eradicate after it's discovered.

The tumors are like armed fortresses – nearly impregnable to cancer drugs and immunotherapies, and encased in a tangle of collagen fibers around their exteriors, says Tanya Khokhlova (coke-low-va), an associate professor of research in the gastroenterology division of the University of Washington School of Medicine.

Pancreatic tumors also are so dense that they create crushing pressure on the blood vessels inside of them and push outward against surrounding structures. Finally, the tumors propagate armies of cells that suppress or kill the body's natural defenders: T-cells and other  lymphocytes attempting to attack the cancer.

“The blood perfusion is low, and anything that is administered systemically doesn't get to the tumor in a large enough concentration,” Khokhlova said of past strategies to eliminate the cancer, mainly via chemotherapies.

The survival rates speak clearly. Overall, the survival rate of pancreatic cancer is about 40% if it remains localized, but if it spreads, that number drops to 3%, according to the American Cancer Society.

But after 12 years of research, Khokhlova thinks she may have a way to infiltrate these tumors.

In murine tests, Khokhlova and researchers in the UW's Applied Physics lab have engineered technology that directs a focused beam of pressure, via an ultrasound device, on the tumor,. Ultrasound waves jostle the tumor, creating small pulsating bubbles, which in turn create cracks within.  The fissures allow therapeutics to enter.

“Pulses of focused ultrasound and cavitation that occur inside the tumor will insert these little cracks and pores and channels through the tumor,” she said. “That would then make it more permeable to anything that's administered systemically, be it chemotherapy or immunotherapy or any other agent used to combat the cancer.”

The ultrasound also beneficially rouses T-cells and lymphocytes to attack the tumor, she noted.

“We’re hoping that it also produces systemic immune response in that those activated T-cells which can go around the body and hunt down cancer cells elsewhere in the body."

So far the tests have been on mice, with a small ultrasound device. Human trials and FDA approval of the clinical system which Khokhlova developed is likely three years away. But Khokhlova hopes her device will give patients hope.

“I know when doctors give the diagnosis, it’s crushing for them and for the patients,” she said. “We hope this will be part of the conversation with their patients once the technology is approved."

UW Applied Physics technician Randall Williams and Minho Song of the the UW Mechanical Engineering Department assisted with this project.