Study yields clues to how drug may boost aged mitochondria

Study yields clues to how drug may boost aged mitochondria

By binding to 12 key proteins, experimental drug SS-31 improves the function of the energy-producing structure inside cells. 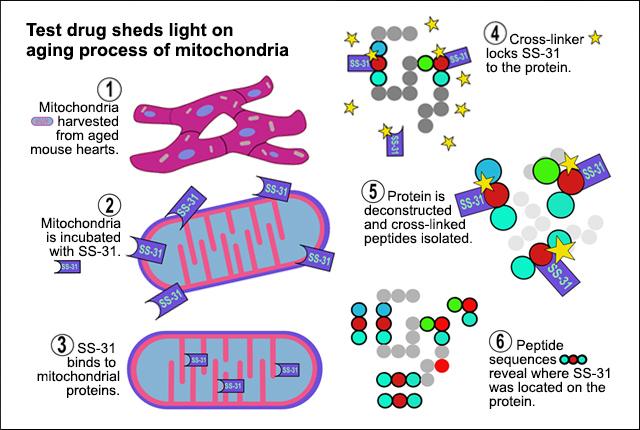 An experimental drug that has been shown to improve the function of diseased and aged mitochondria binds to 12 key proteins involved in energy production, researchers at the University of Washington School of Medicine have found.

The drug, elamipretide, also called SS-31, has shown promise for treating rare inherited diseases that affect the mitochondria, the energy-producing “powerhouses” of our cells. SS-31 also has been shown to improve the function of mitochondria from aged tissues. But its interactions with mitochondria have been unclear.

“We now know that SS-31 binds to these proteins,” said James E. Bruce, the UW professor of genome sciences whose lab conducted the experiment. “Now we can focus on how SS-31 might change how these proteins function and has its effect.”

He and colleagues report findings published today in the journal PNAS.

Mitochondria are small organelles within cells that generate energy that power cells’ molecular machinery. Mitochondria do this by helping break down sugars and fats and storing the energy byproduct in molecules called adenosine triphosphate (ATP). ATP travels throughout the cell to locations where it performs work.

As we age, however, mitochondria begin to malfunction: They generate less ATP and produce more of a harmful byproduct of energy production called reactive oxygen species. These can damage proteins, membranes and other cell structures.

[SS-31 was discovered by accident by Dr. Hazel Szeto, a pharmacologist at Weill Cornell Medical College. While looking for drugs that might bind to opioid receptors, she and colleagues serendipitously discovered that SS-31 improved mitochondrial function, increasing ATP production and decreasing production of reactive oxygen species.]

In the new study, the UW researchers used a technique called chemical cross-linking with mass spectrometry to see whether SS-31 was also interacting with proteins in the mitochondria.

The scientists then ruptured the mitochondria and broke apart the proteins’ amino acid chains into short segments, segregating those segments that had been cross-linked to SS-31. Since the amino acid sequence and structure of the mitochondrial proteins are known, the researchers then used mass spectrometry to determine the specific sites where SS-31 was interacting with the proteins.

They found SS-31 bound to 12 proteins that assemble on the mitochondrial inner membrane. Eight are part of complexes involved in ATP generation, and four help metabolize a molecule called 2-oxoglutarate.

Its effect on 2-oxoglutarate may be important it is a “master regulator” of an energy-producing process known as the Krebs Cycle, said Juan Chavez, a research scientist in the Bruce lab and the study’s lead author. “Depending on how much is present, 2-oxoglutarate can shut the whole cycle down or let it proceed,” Chavez said.

Co-author David Marcinek, a UW professor of radiology who specializes in studying mitochondrial function in chronic disease, said the findings open a new window on how SS-31 works and why mitochondria begin to malfunction with age.

“These findings suggest that, by understanding what changes occur in the functioning of these proteins as we grow older, we may expand our understanding of natural aging.”