DNA fragments from cytomegalovirus, a common cause of birth defects in the United States, are often too small for many standard tests to detect 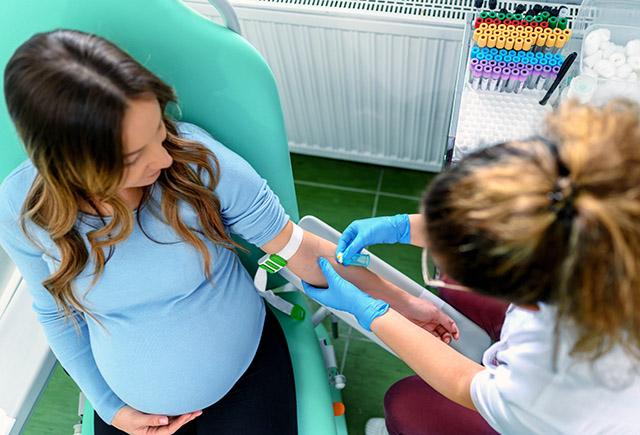 Getty Images
While there is no widely used prenatal test for cytomegavirus, researchers used blood drawn from pregnant women for other tests to do their study.

Many tests for cytomegalovirus infection are difficult to interpret because most of its DNA fragments are too small to be detected in the blood of infected people through current assays.  Laboratory medicine experts at the University of Washington School of Medicine are looking at this problem to find better ways to check for the virus, particularly in pregnant women.

Cytomegalovirus, abbreviated CMV, is a common cause of congenital birth defects in the United States. Worldwide, the virus is thought to affect 1 percent of all newborns, thereby making it responsible for more birth defects than all the other disorders currently tested for in newborn screening programs combined. CMV also can cause deadly infections in people who are immunosuppressed, such as those receiving blood stem cell and organ transplants.

Despite the risk that CMV poses to the developing fetus, routine prenatal screening for virus is not recommended, in part because current prenatal lab tests cannot readily determine fetal CMV infection risk.

“Congenital CMV is a big problem,” said Alex Greninger, a University of Washington School of Medicine assistant professor of laboratory medicine who led the project. “But we don’t have a good prenatal test for it.”

Standard tests for CMV infection try to detect bits of the virus’ DNA that can be found in the blood of someone with an active infection. These tests use a technique called polymerase chain reaction, or PCR for short, that targets a specific segment of the virus’ genome. The technique makes it possible to detect a very small amount of DNA and then make billions of copies of it, a process called amplification, so that it can be analyzed.

The size and location of the segment to be studied is determined by short strings of DNA bases, called primers, which are synthesized in the lab. These bind to the DNA at specific spots. They then initiate, or prime, amplification. This method creates copies of the DNA located between the two primer binding sites. The amplified length of DNA is called the amplicon. The length of an amplicon depends on the distance between the two primer binding sites.

Although this technique can detect minute amounts of DNA, many of tests now performed to assess the level of CMV may give very different answers from the same sample.

Sometimes these test results can differ 100-fold, said the study’s lead author Vikas Peddu, a bioinformatician in the Greninger lab.

To determine why this was so, the researchers studied samples of free-floating DNA that was found in blood collected from more than 2,200 pregnant women for prenatal screening. This DNA, called cell-free DNA, was originally collected to detect chromosomal or genetic abnormalities in fetal DNA present in pregnant women’s blood. In 120 of the samples, the researchers found CMV DNA. Those results indicated the mothers had been infected with the virus.

The researchers determined the sequences of all the DNA fragments in these samples. Then they used a computer code written by Peddu to distinguish the human DNA sequences, which made up more than 99.99% of the cell-free DNA, from non-human sequences, such as viral or bacterial DNA. Once the researchers identified DNA fragments that were from CMV, they were able to determine the CMV fragments’ precise lengths.

“One of the major findings of this work is we found the CMV DNA fragments were much shorter than the already highly fragmented human DNA in circulating cell-free DNA,” Peddu said. “The human fragments had a medial length of 172 DNA base pairs.” The median length for the CMV fragments was 103 base pairs.

“So if you want to accurately detect CMV,” Peddu explained, “you will more likely be successful if you use a test that relies on a shorter amplicon.”  The authors also found many fragments of CMV DNA that would simply be too small to amplify by PCRs used in clinical testing for CMV.

The researchers also looked at the cell-free DNA from immunosuppressed transplant patients with active infection. The scientists found that, while the CMV fragments were longer than those seen in the samples from the pregnant women, they were still significantly shorter than the human cell-free DNA. This may be because in the women had less CMV present, but why this would result in shorter DNA fragments is not clear, the researchers said.

The findings may have application for developing cell-free DNA testing for other infections, Greninger said.

He noted, “There’s growing interest in using cell-free DNA testing for non-invasively determining the cause of many types of potential infections, such as culture negative endocarditis, lung infections, or fevers of unknown origin, since it can detect many different types of pathogens. With this added detection of small fragments that would be missed by PCR, this work adds to growing number of benefits of cell-free DNA sequencing in diagnostics.”

The UW Department of Laboratory Medicine supported the research.

This news item was written by Michael McCarthy.