Users of the investigational device spent 11% more time in the target blood-glucose range than control-group members. 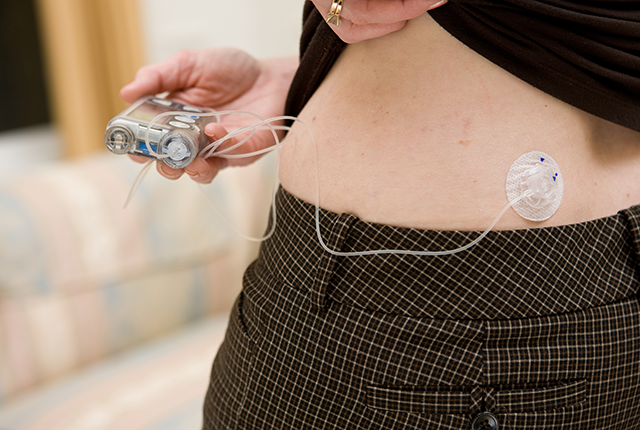 Getty Images
In a study, an investigational device was found to outperform commercially available insulin pumps.

Results were published today in the New England Journal of Medicine.

“This pump uses more artificial intelligence than the other pumps on the market. It identifies trends of the continuous glucose monitor to give insulin that keeps blood glucose in the normal range — without patients having to count carbohydrates,” said Dr. Irl Hirsch. He is a diabetes expert at the University of Washington School of Medicine, one of 16 U.S. trial sites and the only one in the Pacific Northwest.

“Many patients closely manage their type 1 diabetes, and do extremely well,” Hirsch said. “But there’s another, very large group of patients who don’t pay as much attention, for a variety of reasons. Our findings could be informative for those patients, in terms of keeping their blood sugar under better control.”

The 13-week trial enrolled 326 participants ages 6 to 79 years who had type 1 diabetes and had been using insulin for at least one year. Participants were randomly assigned to either a treatment group using the bionic pancreas device or a standard-of-care control group using their personal pre-study insulin-delivery method.

Hyperglycemia, or high blood glucose, caused by problems with insulin pump equipment, was the most frequently reported adverse event in the bionic pancreas group. The number of mild hypoglycemia events, or low blood glucose, was low and was not different between the groups. The frequency of severe hypoglycemia was not statistically different between the standard of care and bionic pancreas groups.

The trial was primarily funded by the National Institute of Diabetes and Digestive and Kidney Diseases (NIDDK), part of the National Institutes of Health. Funding for the study was provided by NIDDK grant 1UC4DK108612 to Boston University, by an investigator-initiated study award from Novo Nordisk, and by Beta Bionics, which also provided the experimental bionic pancreas devices used in the study. Insulin and some supplies were donated by Novo Nordisk, Eli Lilly, Dexcom and Ascensia Diabetes Care. Partial support for the development of the experimental bionic pancreas device was provided by NIDDK SBIR grant 1R44DK120234 to Beta Bionics.