A large-scale survey shows how the changing lifestyles of our children amid COVID-19 restrictions could hold lessons beyond the pandemic. 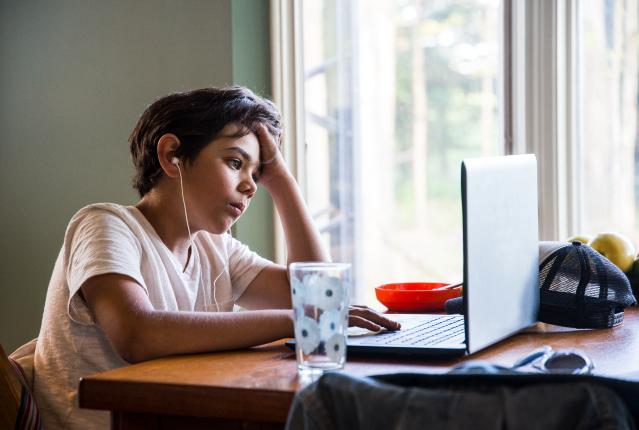 Getty Images
A survey of 1,000 children conducted over a two-week period during the first year of the COVID-19 pandemic shows suboptimal amounts of both screen time and physical activity, according to researchers.

Few equations are as simple as the findings of a survey measuring the habits of 1,000 children during COVID-19: More physical activity and less screen time led to better mental health.

The study, published this month in JAMA Network Open, takes a snapshot of the daily activities of children ranging from age 6 to 17 during the span Oct. 22 to Nov. 2, 2020. During that time, a third wave of new COVID-19 cases in the United States began taking shape, and most of the students surveyed were either learning fully online (50.6%) or within a hybrid system (27.2%).

Surveyed families also reported a daily average of 4.4 hours in recreational screen time for their children – a figure the study notes is in line with most pre-pandemic estimates.

Access downloadable soundbites with Dr. Pooja Tandon describing the effects of screen time and physical activity on mental health during the pandemic.

“I think what the pandemic forced upon families was screen time was needed for school in most cases,” said Dr. Pooja Tandon, an associate professor of pediatrics at the University of Washington School of Medicine and the study's lead author. “Screen time was also sometimes the only way for social interaction for children. So the recreational screen time was more than optional in some cases.”

Hours spent in front of screens, coupled with pandemic-forced social restrictions, hampered opportunities to get outside and be active. Only 195 of the 1,000 children reported 60 minutes of daily physical activity, the recommended standard from the Centers for Disease Control and Prevention. Overall, on average, kids reached 60 minutes of daily activity goal 3.9 days per week.

“If you're doing screen time, you're not doing something else, and that something else could be being physically active," Tandon said. "It could be sleeping. It could be interacting with other humans, loved ones. And all of those things are considered good for your mental health.”

The survey also considered pandemic-related stressors, including family members being essential healthcare workers, family exposure to illness or death related to COVID-19, food insecurity, loss of income, and loss of health insurance. Tandon said children most affected by these stressors were, in turn, less engaged in physical activity and had more screen time than their peers.

“I recognize that this is an incredibly challenging time for parents, and I think there are opportunities as families for us to just prioritize these health behaviors, knowing that it's important for both physical health and mental health,” Tandon said.

Read the American Academy of Pediatrics’ media use guidelines for children.