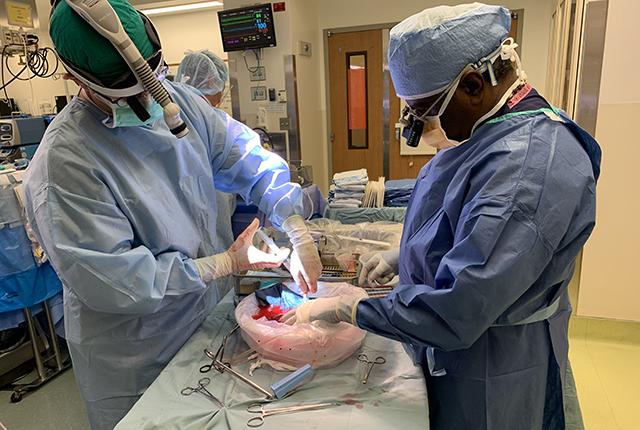 A Washington state woman is recovering after a landmark organ transplant that she hopes will end her nearly decade-long bout with cancer. Kris Anderson, 51, of Redmond, received a lobe of liver from her daughter Lauren, 26, on Dec. 8. It was the Pacific Northwest’s first living-donor liver transplant for metastatic colorectal cancer.

Kris Anderson was discharged from UW Medical Center on Dec. 14, two days after Lauren. Both are recovering well at the family’s home, and both their livers will grow back to approximately 90% of original size in three months.

“This holiday season has been so different than I imagined when we learned that my chemotherapy had stopped working this summer,” Kris Anderson said. “We thought I might have six to 12 months to live. To find out right before Thanksgiving that I was approved for transplant was powerful. I realized I’d have more time to make memories, like teaching my kids how to cook a turkey dinner.”

Dr. Mark Sturdevant led the surgeries, assisted by Drs. Patrick Healey in the resection of Lauren’s liver and by Ramasamy Bakthavatsalam in the transplant. They started Kris Anderson’s procedure first to confirm their belief, based on CT and PET scans, that the cancer metastasis was confined to her liver. Neighboring lymph nodes were removed and rushed to the pathology lab for assaying; the finding would determine whether the transplant proceeded.

When no cancer cells were detected, the team removed the right lobe of Lauren’s liver and transplanted it into her mom. The two surgeries encompassed nearly 12 hours.

“The transplant of a healthy liver into what we think is a cancer-free body gives Kris the best possible chance to live a normal life,” Sturdevant said. The patient has a 60-70% chance of five-year survival, Sturdevant said, with the caveat that the prognosis is based on an extremely small set of patient-outcomes data.

Colorectal cancer is the third leading cause of cancer-related deaths in U.S. adults, according to the American Cancer Society. In approximately half of those adults, the malignant cells also metastasize to the liver, and only 10-20% of these patients are able to undergo curative attempts to remove the cancer surgically. The majority of patients undergo chemotherapy and/or radiation treatment, but only 10-20% survive five years or longer.

Organ transplant has long been discounted as an option for these patients, for several reasons.

First, the perpetual shortage of organ donors demands that available deceased-donor grafts go to patients with the best chance of survival – which does not describe patients with known cancer metastases. Another concern is that the immunosuppressive drugs that transplant recipients must take to stave off organ rejection would also lower their ability to fight a re-emergence of cancer.

Even if metastases were not a consideration, colon cancer does not impair liver function at nearly the rate as diseases such as cirrhosis and hepatitis. Deteriorated organ function is the main criteria for placement on transplant waiting lists, so most people with Anderson’s cancer would die before their liver deteriorates enough to qualify for a deceased-donor organ, Sturdevant said.

Only recently, in 2013, did doctors at the University of Oslo in Norway publish the rationale and protocol for liver transplants in patients with colorectal liver metastases.  In 2018, the Cleveland Clinic claimed the first such transplant in the United States. Uptake has been slow across U.S. hospitals, amounting to fewer than 25 transplants performed for this indication so far, said Dr. Roberto Hernandez-Alejandro, chief of transplant at University of Rochester in New York. He has led five of these transplants and is creating a national registry of U.S. cases.

Sturdevant joined UW Medicine this year after developing proficiency in living-donor liver transplantation at the King Faisal Specialist Hospital in Riyadh, Saudi Arabia, and at the University of Pittsburgh, which today is among the handful of U.S. sites that perform liver transplant for colon cancer metastases.

Patients such as Kris Anderson, who meet the strict criteria for transplant, require the extraordinary gift of a lobe of liver from a friend or relative whose blood type matches.

Anderson’s original cancer diagnosis came in December 2011, with her first colonoscopy. The tumor was surgically removed from her colon, but a month later the liver metastasis was discovered. Doctors employed several strategies, starting with chemotherapy – there were dozens of rounds over nine years, Anderson said – as well as radiofrequency ablation and radioembolization. The treatments appeared to have kept the cancer from spreading beyond the liver, but failed to eradicate it and took a toll on the organ.

This summer, soon after Anderson learned that her recent chemotherapies had not improved her condition, UW Medicine-Seattle Cancer Care Alliance oncologist Dr. William Harris connected her with Sturdevant to explore the potential of a living-donor liver transplant.  It was quickly established that her two daughters shared Kris' blood type, and Lauren, who lives in Portland, became the designated donor.

Reflecting on what helped her manage nearly a decade of late-stage cancer, Kris Anderson first pointed to support from family and friends and her diverse medical team. She also said investing time to research treatment options empowered her to advocate for herself, not only with her care team but also with her health insurance company.

"It’s important to be educated about the options available to you, which isn’t always easy.  It’s worth fighting for things like insurance coverage because there haven’t been that many of these procedures and it’s not considered the standard of care," she said of her transplant.

“And I think it is very important to have hope. I hit Year 9, and I’m so thankful for that time with my family and friends – and now, for the possibility of more time to make memories.”