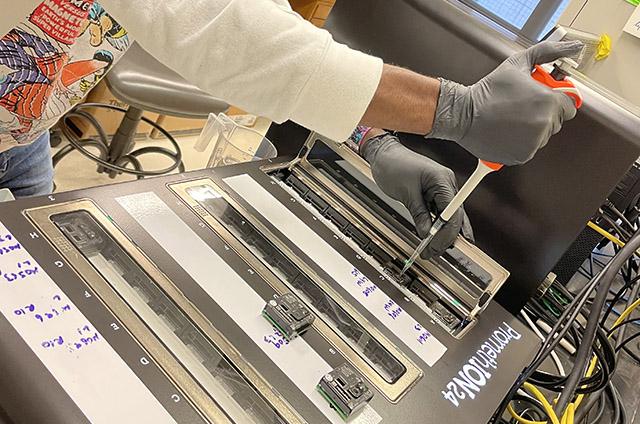 UW Medicine physician/scientist Danny E. Miller has received a competitive National Institutes of Health Director’s Early Independence Award, which provides up to $1.25 million over 5 years. Miller is an assistant professor of pediatrics, Division of Genetic Medicine, and of laboratory medicine and pathology at the University of Washington School of Medicine.

The award, a part of the NIH’s High-Risk, High-Reward Research Program, supports early-career scientists who have the intellect, creativity, drive, and maturity to lead an independent research program.

Miller uses a recent advance in genome sequencing technology, called long-read sequencing, to improve the process of diagnosing genetic disorders and to explore how changes in DNA and RNA contribute to genetic disease.

Compared to earlier methods, long-read sequencing produces longer DNA or RNA fragments that, when assembled together, provide a clearer picture of structural changes in the genome. This technology can also reveal patterns in the genome that previous approaches missed. For example, long-read sequencing helps scientists better detect repeated sections of DNA and how often they are repeated. The repeats, called copy number variants, can have implications for predicting or diagnosing genetic disorders such as Huntington’s disease or muscular dystrophy.

Miller’s research mission is to tap into such recent genomic advances to help solve undiagnosed genetic disorders. For example, his lab employs innovative technologies to try to improve the efficiency and effectiveness of genetic testing in clinical settings. He wants to reduce the uncertainty and difficulty faced by patients and families with unexplained conditions.

“Today, genetic testing is stepwise: first one test, then another, and another. This can take years to navigate,” Miller noted. “One of my goals is simplifying testing so patients don’t have to wait as long to get a full genetic evaluation.”

He predicts that long-read DNA and RNA sequencing may one day replace nearly every genetic test that physicians currently send out to clinical labs. He added that the diagnostic rate, which currently sits around 50%, would also likely be higher.

Although Miller’s lab will concentrate in the short term on developing long-read sequencing for clinical use, in the long term his team will shift to the biological basis of the disorders they uncover using this technology.

His approach to mining human genomes attempts to seek out and characterize previously undiscovered genetic variation of medical importance. By evaluating challenging unsolved patient cases, Miller anticipates that he and other scientists in this field will gain new insights into cellular pathways that have been difficult to study with previous technology.

Miller first became acquainted with these technologies while he was an M.D./Ph.D. student in the lab of R. Scott Hawley at the Stowers Institute for Medical Research and the University of Kansas. Afterward, during his combined residency in pediatrics and medical genetics at UW Medicine and Seattle Children’s, he strengthened his expertise in this area by conducting studies in the lab of Evan E. Eichler, professor of genome sciences at the University of Washington School of Medicine.

Growing up as the child of deaf parents, Miller became curious about why deafness occurs. During high school, he taught himself to code and took a job in the telecommunications industry. He later earned an undergraduate degree in finance while working full-time. In the back of his mind, though, he began thinking about how he could combine his programming knowledge with science.

“Pediatric genetics was an easy fit for me because it combined my computational experience, my desire to see patients, and my need to work on really challenging problems,” Miller said. “The fact that my parents were deaf probably played into my choice of medical and research specialty as well.”

The award from the NIH will open doors for  Miller not only as a scientist, but also as a teacher.

“It’s amazing and humbling to have this level of support and flexibility so soon in my research career. It allows my lab to test new ideas and establish ourselves as experts in this growing field,” Miller said. “I hope it also serves to attract graduate students and postdoctoral researchers. Being a mentor and helping my students meet their goals is one of my biggest motivators.”

Read a story by Dean Owen from the Brotman Baty Institute for Precision Medicine on how Miller and his colleagues obtained a whole genome sequence for a newborn within three hours after birth to assess the infant's genetic risks.