UW Medicine will be part of the Cellular Senescence Network to research these cells in aging and other processes. 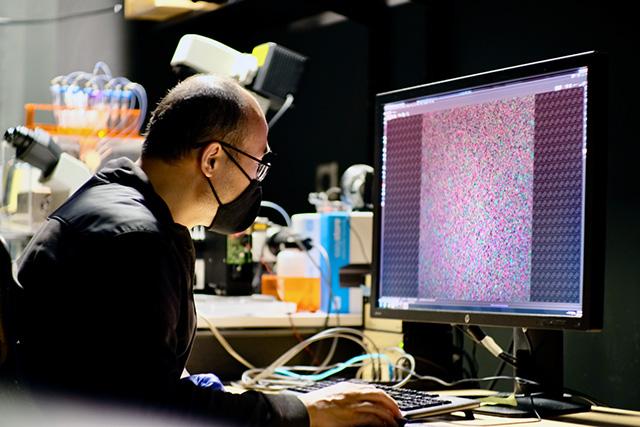 Ian Haydon
A scene from the Liangcai Gu lab, where researchers will develop ways to search for harmful aging cells in different tissues.

Efforts to understand aging cells in human tissues have received increased support from the National Institutes of Health. New grants, as part of the Cellular Senescence Network, have been awarded to several research teams across the country, including a group headed by Liangcai Gu at UW Medicine.

The NIH announced the program Oct. 20.

Gu, an assistant professor of biochemistry at the University of Washington School of Medicine in Seattle, will develop and apply strategies to search for harmful aging cells in different tissues.

“When we talk about tissue, the first thing we have to face is the complexity of the cells,” Gu said. “To analyze the real functional state, it's not enough to look at isolated cells. The ideal way to understand cells is to look at individual cells in their natural context and analyze many molecules at the same time to precisely know who they are and what they can do.”

Gu’s laboratory is pioneering ways to simultaneously image tens of thousands of different RNA transcripts in complex tissues, as part of an effort to generate single-cell maps of tissues and organs.

“For the first two years of this grant, we are going to analyze tissues from mice,” Gu said.” Then, we will apply what we have learned to human tissues from the heart, liver, and kidney.”

Gu added, “Ultimately, we hope that the discoveries we make will guide drug development. We want to integrate this understanding of cell aging with emerging treatments such as immunotherapies so that one day we can direct the body to eliminate specific cells that contribute to aging and disease.”

The NIH established the Cellular Senescence Network, or SenNet, to comprehensively identify and characterize the differences in senescent cells across the body, across various states of human health, and across the lifespan.

SenNet will provide publicly accessible atlases of senescent cells, the differences among them, and the molecules they release. These are being created using data collected from multiple human and model organism tissues. To identify and characterize these rare cells, SenNet will develop new tools and technologies that build upon previous innovations in single-cell analysis, such as those from the Common Fund’s Human Biomolecular Atlas Program and Single Cell Analysis Program.

Senescent cells are both rare and diverse, which makes them difficult to study. The number of senescent cells in a person’s body increases with age.  The accumulation of senescent cells as people get older could be due to generating more of these cells coupled with a decreased ability to regulate or eliminate them. Senescent cells do play some positive roles, but they can also contribute to chronic diseases that become more likely to occur with aging, such as certain forms of neurodegenerative and cardiovascular disorders, as well as cancers. New therapeutics are being explored to try to target and oust certain senescent cells.

SenNet aims to unite cellular senescence researchers by developing common terms and classifications for senescent cells. SenNet will share data and resources that would otherwise be difficult to achieve through individual efforts. Such collaboration will accelerate the ability of biomedical researchers to develop therapeutics that target cellular senescence and improve human health.

SenNet is a trans-NIH program funded by the NIH Common Fund and overseen in collaboration with the National Institute on Aging and National Cancer Institute.