Neurotoxin helps at work for those with rare voice disorder

Neurotoxin helps at work for those with rare voice disorder 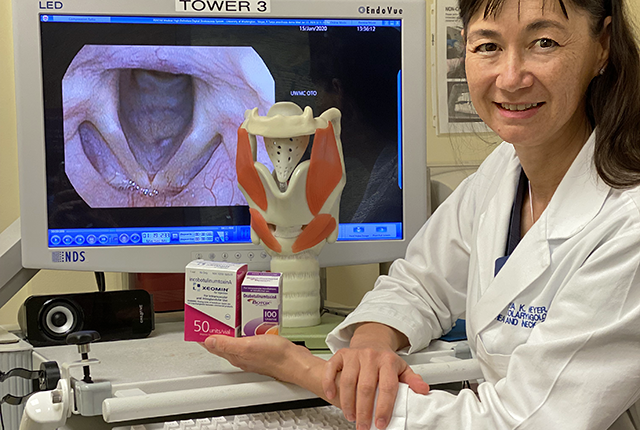 Dr. Tanya Meyer displays botulinum neurotoxin products. Depicted at rear is an image of a patient's larynx and vocal folds.

Spasmodic dysphonia is a rare neuromuscular condition that makes people’s voices sound strangled and hoarse. For years doctors have used injections of botulinum neurotoxin (BoNT, clinically, and Botox, familiarly) to quell patients’ muscle spasms within the larynx. Often an injection makes a disordered voice sound more normal for three to six months, then the drug wears off and another injection is needed.

[Listen to a patient with spasmodic dysphonia, before and after an injection.]

Despite the benefit, patients can struggle to get treatment authorization from insurers, who frame resistance in the dearth of scientific evidence of BoNT’s value, said Dr. Tanya Meyer, an otolaryngologist with UW Medicine in Seattle.

She is lead author of a new study reporting that BoNT treatment significantly improves patients’ ability to be productive in the workplace. The paper was published this month in JAMA-Otolaryngology-Head and Neck Surgery.

“Speaking is integral to communicating in most jobs,” Meyer said. “People with SD can't open their mouth and know for certain what voice, if any, will come out; sometimes the larynx just spasms shut.  It’s hard to project at meetings, and vocalizations can sound anxious or nervous even if the person is confident.  For unaccustomed listeners, it’s hard to understand these speakers.”

Meyer’s study enrolled 75 patients with the condition. They completed validated questionnaires immediately before a BoNT injection and then again 30 days later. The surveys asked respondents to rate their voice-related productivity across workplace and non-work activities.

It’s worth noting, Meyer said, that most subjects in this study were established patients who had received injections every three to six months for several years.

“They all started the study with better voices than they had before receiving Botox injections," she said. "Patients generally don’t allow their voice to deteriorate to its pre-treatment condition between injections. So we think that patients naïve to treatment might experience an even greater improvement than the study showed.”

Meyer acknowledged that the lack of a control group of patients receiving a placebo or sham treatment precludes the investigators from saying the BoTN injections caused the improvement.

“Clinicians and insurers need to understand that when patients have a disordered voice, they often suffer in the workplace. Many people change jobs or simply stop working because their disordered voice makes communication too difficult. Though we can't ascribe causality, this treatment strongly appears to help people communicate and stay productively employed – and off of disability.”

She added: “These people are getting a shot directly into their larynx. It is not comfortable. No one would do that if it didn't work.”

Spasmodic dysphonia affects approximately 4 people in 100,000 and its cause is unknown. Women are four times as likely as men to develop it. The condition’s onset is usually between age 40 and 60 – prime earning years for most people.

“It can be disabling for anyone’s career. These people are not chosen for promotion, they are passed over for jobs,” Meyer said. “We hope these findings show the real improvements to society that these treatments can bring.”