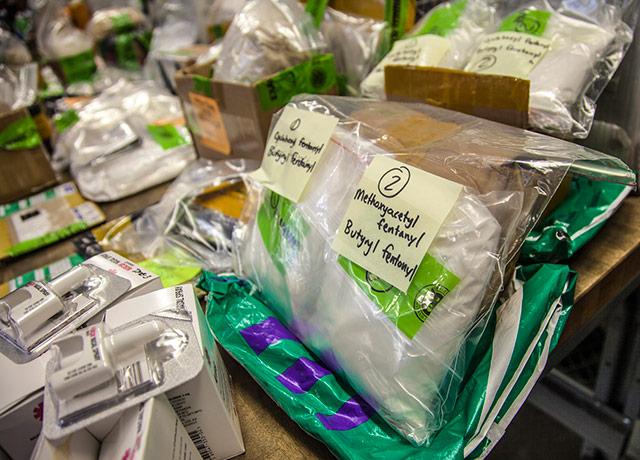 U.S. Customs and Border Protection
A table full of fentanyl and other designer drugs seized by U.S. agents in November 2017 at a mail facility in Chicago.

KING COUNTY, WA—Drug and alcohol use caused the deaths of 379 King County residents in 2017, an increase from 348 in 2016, according to two new reports published today by Public Health – Seattle & King County and the University of Washington’s Alcohol and Drug Abuse Institute.

Data from the 2017 Overdose Death Report describes drug and alcohol-caused deaths over the past decade investigated by the King County Medical Examiner’s Office. The report found that in 2017, heroin and opioids, including fentanyl, continue to be the most common drugs associated with fatal overdoses (69 percent) while the rate of deaths involving methamphetamine continue to increase sharply.

There is continued concern about the growing impact of illicit fentanyl. Fentanyl was involved in 33 fatal overdoses in 2017, up from 23 in 2016. There have been 17 confirmed fentanyl-related deaths in the first quarter of 2018.

Findings from the reports include:

The 2017 Drug Trends Report, also published today, provides context for understanding the lives of drug users. For example, among those surveyed at the syringe exchange last year, 69 percent were homeless or impermanently housed and 42 percent had been incarcerated in the prior year.

Progress made to address the epidemic

King County, along with partners have taken steps to implement the recommendations presented by the Heroin and Prescription Opiate Addiction Taskforce to confront the epidemic.

Examples of progress include:

Key ways to reduce the risk of overdose include:

“Methamphetamine and heroin are the most common illicit drugs locally. They predominate in police evidence testing, drug court, drug treatment, calls to the Helpline, and deaths. Thankfully, based on the 2017 syringe-exchange survey, we know that most methamphetamine and heroin users want to stop or reduce their use,” said Caleb Banta-Green, principal research scientist at the UW Alcohol and Drug Abuse Institute. “The county is building more capacity to help people quickly access treatment.”

“The opioid epidemic in King County continues to increase, with no end in sight,” said Dr. Jeff Duchin, Health Officer for Public Health – Seattle & King County. “We know that most people with opioid use disorder want help to reduce their use, and we are increasing treatment access throughout the County. But the epidemic is outpacing our efforts, both locally and nationally."

“Even as we make progress, including the expansion of evidence-based medication assisted treatment and distributing naloxone into the community, we must also redouble our efforts to prevent drug use and overdose,” said Brad Finegood, chief health integration strategist, Behavioral Health and Recovery Division and co-chair, Heroin and Opiate Addiction Task Force.

“Each data point we collect represents the countless friends, families and community members devastated by loss from drug overdoses,” said Dr. Richard Harruff, chief medical examiner, King County Medical Examiner’s Office. “In this spirit, we convey our heartfelt condolences to those who have lost loved ones and dedicate our efforts to the hope of turning the tide on this societal disease.”

“Nationwide data shows that American Indians and Alaska Natives abstain from alcohol at greater rates than other races or ethnic groups, but this report shows that there is a lot of work to be done collectively with those suffering from addiction to prevent both alcohol and drug-related deaths,” said Dr. Greg Maddox, chief medical officer at Seattle Indian Health Board. “This data points to an opportunity to further expand beyond western medicines, which is why we are adamant about treating our patients in a culturally appropriate way and having traditional methods at the center of everything we do.”