The role in a national trial could validate the technology as a predictor for drug therapies’ effectiveness against patients’ kidney diseases. 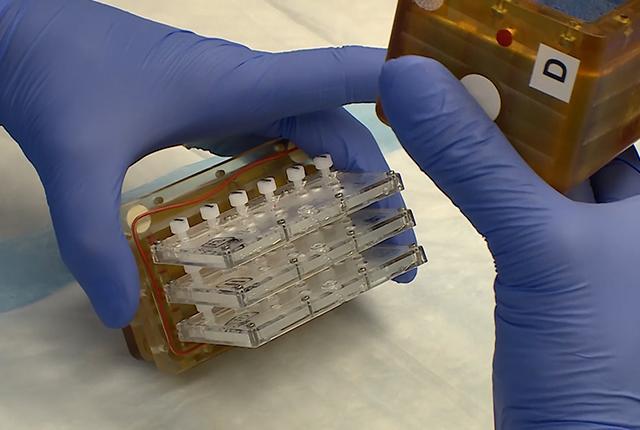 Randy Carnell / UW Medicine
Three chips of kidney organoids are unpacked from a container that went into space on a NASA trip in 2019.

In 2012, investigators at the Kidney Research Institute (KRI) started work on a concept: Develop a portable, miniature environment – a dish or a “chip” – in which human cells could be grown into functional, living parts of a kidney and observed in disease and in health. This micro system would be used to test drug therapies against diseases without putting actual patients in danger of side effects.

Today the institute, a collaboration of UW Medicine and Northwest Kidney Centers, is on the cusp of proving the value of its “kidney on a chip” system.  A multimillion-dollar funding award announced this week gives KRI investigators a role in U.S. clinical trials of drugs being tested on patients with kidney diseases.

In the trials, patient subjects will be randomly assigned a test therapeutic and be monitored for their response. The subjects also will provide urine samples from which KRI researchers will derive stem cells and make human kidney organoids to put into chips. The organoids will be exposed to the same drug used in the trial, so if an individual’s response mirrors that indicated by the chip, it will validate the chip model as a predictor of drug effectiveness.

Dr. Jonathan Himmelfarb, the UW nephrology professor who directs the KRI, sounded confident that this phase of testing will confirm the chip system’s accuracy. He’s more excited, he said, about the kidney chip’s prospects for making clinical trials more useful.

“This is really a precision medicine project, with the goal to find the right therapy and dose that best helps a patient fight against a type of kidney disease. What we can do with chips is figure out the molecular mechanisms for why people do or don’t benefit from the trial treatment” he said.

“We can test multiple different treatments for each individual and try to determine which would have been the best for them. If this works in concept, you could first take a patient’s cells, use the chip to find out the likely best treatment, and then enroll them in the appropriate clinical trial. This could revolutionize how clinical trials are done, and how treatments are developed and optimized for individuals instead of whole populations.”

Today’s funding award was announced by the National Center for Advancing Translational Sciences (NCATS), part of the National Institutes of Health. Ten five-year grants, totaling $35.5 million, will enable researchers to test tiny tissue-chip models of conditions including fatty liver disease, muscular dystrophy, and heart disease.  The KRI is running the only kidney-focused project, and the UW’s share will be about $4 million, said Himmelfarb. He is co-lead investigator with Matthias Kretzler, a professor of nephrology at the University of Michigan.

The big-picture hope is that the chip model will reduce the volume of late-stage clinical trials that fail due to drug-safety problems or ineffectiveness, said Danilo Tagle, who oversees the program at NCATS.

“Our hope is to eventually impact the fundamental way we do clinical trials,” he said. “If tissue-chip data can predict which patient populations might benefit the most from investigational drugs, this information could potentially improve clinical trial success rates.”