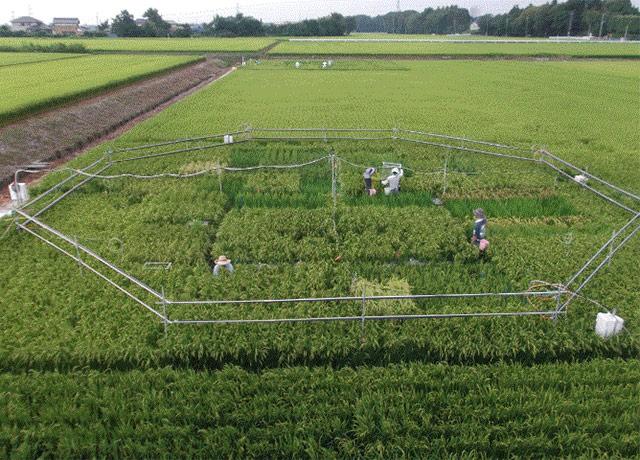 Toshihiro Hasegawa, National Agriculture and Food Research Organization of Japan
Rice within the octagon in this field is part of an experiment started by a University of Tokyo professor and designed to grow rice under different atmospheric conditions.

Higher concentrations of carbon dioxide are associated with reductions in protein and multiple key nutrients in rice, according to a new field study by an international team of scientists.

The study, published today in Science Advances, shows for the first time that rice grown at concentrations of atmospheric CO2 expected by the end of this century has lower levels of four key B vitamins. The findings also support research from other field studies showing rice grown under higher CO2 concentrations has less protein, iron and zinc.

Rice is the primary source of food for more than 2 billion people. Decreases in the nutritional content of rice could have a disproportionate impact on health outcomes in the poorest rice-dependent countries, according to the team, which includes researchers from the University of Washington schools of public health and medicine.

“Rice has been a dietary staple for thousands of years for many populations in Asia and is the fastest growing food staple in Africa,” said co-author Kristie Ebi, director of the UW Center for Health and the Global Environment and professor of global health and environmental and occupational health sciences. “Reductions in the nutritional quality of rice could affect maternal and child health for millions of people.”

Ebi's colleague Adam Drewnowski, director of the UW's Center for Public Health Nutrition program and a professor of epidemiology, also was a co-author.

[Download video soundbites and produced segment, and other visuals related to this news.]

The researchers conducted the field study in China and Japan on 18 common strains of rice. Their results confirm previously reported declines in protein, iron and zinc in rice grown under atmospheric CO2 concentrations that scientists expect by the end of the 21st century. In addition, the paper reveals for the first time average declines in vitamins B1, B2, B5 and B9 — vitamins essential to helping the body convert food into energy.

The nutritional deficits are likely to hit hardest in countries where rice makes up a major portion of daily diets. About 600 million people, mostly in Southeast Asia, get more than half of their daily calories and protein directly from rice. CO2-induced changes in the nutritional quality of rice would likely “exacerbate the overall burden of disease and could affect early childhood development,” researchers said, noting that undernutrition can worsen diarrheal disease and malaria. CO2-induced nutritional deficits are projected to be greater for those countries with the lowest overall gross domestic product per capita, the study showed.

“This study provides important insights into how higher CO2 concentrations could affect the nutritional quality of multiple varieties of rice, identifying for the first time that the concentrations of B vitamins will be reduced with greater emissions of CO2. This is an underappreciated risk of burning of fossil fuels and deforestation,” said Ebi.

Some studies have noted that higher levels of CO2 spur plant growth through increased photosynthesis. “People say more CO2 is plant food, and it is.  But how plants respond to that sudden increase in food will impact human health as well, from nutritional deficits, to ethno-pharmacology, to seasonal pollen allergies — in ways that we don’t yet understand,” said study co-author Lewis Ziska, research plant physiologist for the Adaptive Cropping Systems Lab of the United States Department of Agriculture‘s Agricultural Research Service.

The reported changes in micronutrients were expected based on how elevated concentrations of CO2 affect plant physiology, increasing the carbohydrate content (e.g. starch and sugars) and reducing protein and mineral content. The changes in B vitamins may relate to the well-established decline of nitrogen in plants exposed to elevated concentrations of CO2, Ziska said.

The authors said agronomists, epidemiologists, physiologists, nutritionists, and healthcare providers need to accurately quantify the nature of CO2-induced changes to human nutrition and to associated health outcomes. Research also is needed to identify options to reduce or negate the risks, including studies to understand whether traditional breeding or genetic modification could lead to nutritionally superior rice, and understanding whether the nutritional quality of rice could be improved through the application of mineral fertilizers or post-harvest fortification.

The senior author was Chunwu Zhu of the State Key Laboratory of Soil and Sustainable Agriculture, Institute of Soil Science, Chinese Academy of Sciences, Nanjing. The research team also included the University of Tokyo; Bryan College of Health Sciences in Lincoln, Nebraska; and the University of Southern Queensland.