The Center for Dialysis Innovation earns acclaim for a porous synthetic graft intended to make the blood-cleansing process safer and more reliable. 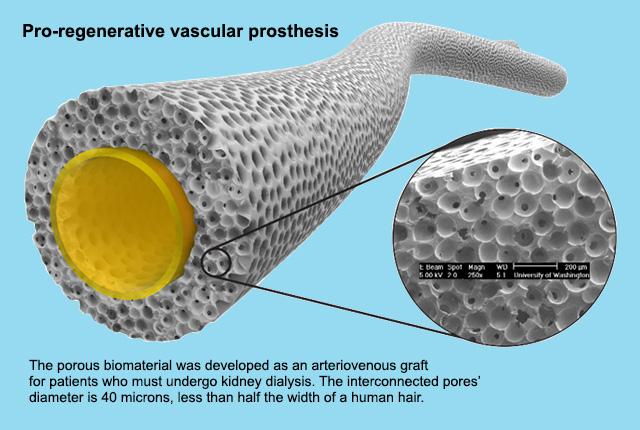 Le Zhen, University of Washington Department of Chemical Engineering
The winning entry from the Center for Dialysis Innovation, a collaboration of UW Medicine and Northwest Kidney Centers.

A national contest has sparked six award-winning ideas to reduce the burden of kidney dialysis among 2 million people globally who receive the blood-cleansing therapy to survive.

One winning entry came from Seattle’s Center for Dialysis Innovation (CDI), a collaboration of scientists and physicians at UW Medicine and Northwest Kidney Centers.

“We’ve designed an arteriovenous, or AV, graft that we think will reduce surgical reoperations to replace failed conduits, thereby diminishing patient trauma and hospitalization costs,” said Buddy Ratner, a professor in bioengineering and chemical engineering at the University of Washington.

KidneyX, short for Kidney Innovation Accelerator, announced the honorees this week.  KidneyX is a joint effort of the U.S. Department of Health and Human Services and the American Society for Nephrology. Through a series of cash competitions, it seeks to speed drug and device development to combat the meteoric growth of kidney disease, now estimated to afflict 850 million people worldwide.

KidneyX’s inaugural challenge: Re-imagine the dialysis process. The CDI submitted two entries: a portable dialysis unit, which was a Phase I finalist, and the AV graft, which as a Phase II winner earned $500,000 toward development.

What is an AV graft?

Kidney failure occurs when patients aren’t sufficiently clearing toxins that accumulate in their bodies. When kidneys shut down completely, complications emerge quickly and patients must go on dialysis or they will die in less than a month.

It is necessary to create a site where dialysis technicians can access a patient’s blood repeatedly—thousands of times, potentially—without permanently damaging blood vessels. Catheters surgically implanted in patients’ chests are the first option to connect patients to dialysis machines. But catheters also have a high infection rate, so those port sites require fastidious care and antiseptic cleaning by patients.

After the dialysis regimen is established, patients are invited to have a surgically created fistula or surgically implanted AV graft. For the fistula, a forearm vein and artery are connected directly to create a thicker, more durable vessel for repeated needle pricks. But fistulas take time to mature, and it is not a certainty that they’ll result from the operation.

The AV graft is a surgically implanted, prosthetic Teflon tube that connects an artery and vein in a patient’s arm. It is intended to make dialysis faster and to withstand thrice-weekly needle insertions. Current AV grafts are FDA-approved, but they are prone to clotting and infection, Ratner said: Those in use today have about a 50% failure rate after one year, which means a major reoperation for the patient.

Improving on the current design

The CDI team hypothesized that the AV grafts’ Achilles heel is their composition: an inert material thought to be biocompatible but which, in many patients, is interpreted by cell macrophages as a foreign object. This brings repeated volleys of inflammation that encapsulate the graft with scar tissue and eventually lead to a blocked blood vessel.

“What’s needed is a synthetic tube that heals more reliably and more like a living blood vessel,” Ratner said.

Fortuitously, in the 1990s, Ratner’s bioengineering team invented a biomaterial that had interconnected pores 40 microns in diameter—about half the width of a human hair. It had been successfully integrated with other human tissues.

“The test graft integrated so well into the (carotid) artery that it was nearly indistinguishable from original tissue,” Ratner said. “It was just what we wanted to see: blood vessels and healthy muscle tissue growing into these 40-micron pores.”

With a much lower failure rate, AV grafts could be “transformational” for dialysis patients, Ratner said. Ratner and CDI co-director Jonathan Himmelfarb, a UW Medicine nephrologist, have created a spinoff company that will pursue funding to thoroughly test the CDI’s prize-winning prototype.

Ratner and representatives of the five other winning innovations sent video presentations to the KidneyX online award ceremony. View Buddy Ratner's presentation below.