How some mammals pause their pregnancies

How some mammals pause their pregnancies 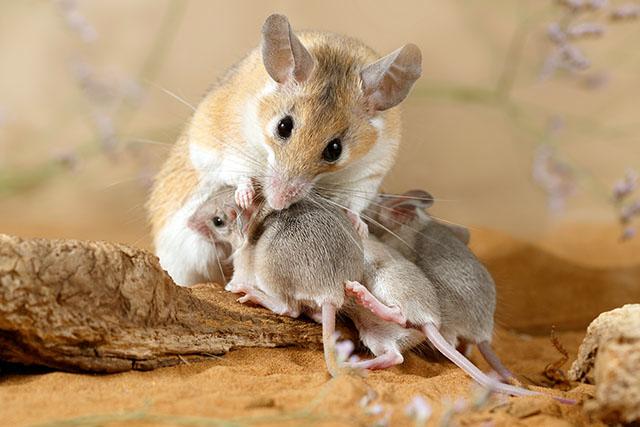 Getty Images
Some mammals, such as mice, can delay their pregnancies after conception until conditions are better for bearing offspring.

How do some mammals postpone the development of their embryos to await better conditions for having offspring?  A recent study at the UW Medicine Institute for Stem Cell and Regenerative Medicine explored this reproductive enigma, which can occur in more than 130 species of mammals, including  some marsupials.

The study was study led by Abdiasis Hussein, a graduate student in the lab of Hannele Ruohola-Baker, UW professor of biochemistry and associate director of UW Medicine’s Institute for Stem Cell and Regenerative Medicine. The findings were reported in Developmental Cell, a Cell Press scientific journal.  The results not only advance the understanding of delayed embryo implantation, but also suggest how some otherwise rapidly dividing cells, such as those in tumors, become quiescent.

In the suspended state of pregnancy called embryonic diapause, an early-stage embryo refrains from implanting in the mother’s uterus, where it could be nourished to grow into a baby.  Instead, like a seed, the embryo remains dormant until certain molecular regulators prod it to germinate.

Diapause, or delayed implantation, is a biological strategy for waiting out conditions unfavorable to sustaining newborns, such as lack of food, insufficient maternal fat stores, or older siblings who haven’t been weaned.

Bears, armadillos, seals, and some otters, badgers and other weasel-like animals undergo seasonal diapause, as a regular part of their reproductive cycles.  Many types of bears, for example, breed in the late spring or early summer. The female then voraciously hunts for food. Only when the female bear has sufficient body fat and weight will one or more of her embryos implant months later, after she retreats to her den. Any cubs would be born in late winter.

In the wild, some animal embryos will delay implantation until their mother has enough energy and nutrients in her body to support them.  Starvation or other stresses somehow provoke an embryonic stop-time. This response is an effort to protect their survival.

The researchers did extensive studies of how metabolic and signaling pathways control both the dormant and active states of mouse embryos and of mouse embryonic stems cells in lab dishes..  Metabolism concerns the life-sustaining chemical activities cells carry out to convert substances into energy, build materials, and remove waste. By analyzing these reactions’ end products, called metabolites, the scientists could begin to pull together a picture of what happens to cause diapause, and how cells are released from its clutches.

The scientists also looked at gene expression in comparing cell states. They sought to determine what might be influencing how the DNA code was being interpreted, what critical proteins were being produced and in what amounts, in the suspended and active states.

According to embryonic stem cell researcher Ruohola-Baker, epigenetic differences in interpreting the same DNA code, rather than any alterations in the DNA itself, may be key to understanding how embryos enter and exit diapause.

Further investigation pointed to a set of proteins vital in embryonic cell survival. The activity of the genes related to these proteins, as well as levels of certain amino acids, were ramped up in the diapausal embryos.  For example, by using CRISPR gene-editing technology, Hussein and Julie Mathieu, UW assistant professor of comparative medicine, squelched the flow of glutamine, an amino acid that controls an important metabolic (energy-use) pathway.

The researchers collected additional data that indicated that this and other metabolic factors influenced a catalytic enzyme, mTOR, that regulates many cell processes, including cell proliferation, growth, and protein synthesis. mTOR is also involved in “sensing” cell nutrient and energy stores.

mTOR is already known to be a central regulator of metabolism and physiology in mammalian aging and cancer.  It also manages aspects of embryonic growth and development.  In this study, situations that inhibited mTOR led to the distinct metabolic profile that characterizes diapause.  Researchers also found that this inhibition was reversible.

Understanding the mechanisms behind diapause could advance knowledge in medicine, as well as in wildlife biology.  Carol Ware, a UW professor of comparative medicine, said that diapause is an essential means of survival for some species, and occurs under environmental stress in others.

Research on the mechanism of diapause in animals is an important step in seeing if this cellular response can be harnessed for clinical therapies, such as better in vitro fertilization procedures to help people have children.

Hussein believes this line of research might also have significance for future cancer studies.  Figuring out why and when cancer cells enter quiescence might help explain their hunkering down to withstand chemotherapy, and reviving themselves later. Perhaps a therapy eventually could be devised, he said,  that could wake up the cells to coincide with the timing of anti-cancer drugs.

The lead author of this study, Abdiasis Hussein, was an infant when his family escaped civil war in Somalia.  He grew up in United Nation refugee camps in Kenya.  When he was a teenager, he and his family moved to the United States under the sponsorship of his sister.  He said he decided to better his life through education, and not settle for a dead end job.  Through his teachers, he discovered that he enjoyed scientific research. He felt that finding new things people didn’t yet know was his calling.  He first earned an associate degree from San Diego Mesa College, then received a scholarship from the Jack Kent Cooke Foundation and the American Chemical Society  to study biochemistry  at  the University of  California, Los Angeles.  He is completing his Ph.D. training at the UW School of Medicine.  He has spoken about his chosen profession before the UW Somali Student Association, and volunteers at the Somali Health Board.