How one SARS-CoV-2 protein keeps cells from fighting back

How one SARS-CoV-2 protein keeps cells from fighting back

Findings may explain why people can produce high levels of the coronavirus and spread infection before symptoms appear. 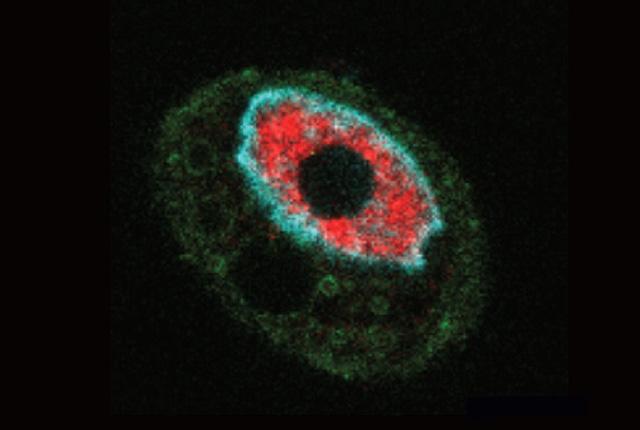 Greninger lab
In SARS-CoV-2-infected cells (green), mRNA (red) is trapped in the nucleus. The blue represents the DNA of the nucleus.

New research has uncovered a way SARS coronaviruses delay an immune defense against them. The coronavirus responsible for the SARS outbreak of 2003 and the one causing the current pandemic may prevent cells from responding to infection in a similar manner. They do this by making a viral protein that keeps molecules from moving through pores in the membrane that separates a cell nucleus from the surrounding cytoplasm.

“With these pores blocked, infected cells can’t fight back,” said Dr. Alex Greninger, assistant professor of laboratory medicine and pathology at the University of Washington School of Medicine, who led the study. “Eventually, the cells are able to respond and mount a response, but the action of this protein gives the virus time to replicate and generate a large viral load.”

The findings may explain why people infected with COVD-19 can produce very high levels of the virus and spread the infection before they develop symptoms. Such asymptomatic transmission is thought to be a major reason the virus spreads so quickly through communities.

The nucleus, the cell’s command center, is surrounded by a membrane that separates it from the rest of the cell. To enter or leave the nucleus, molecules must pass through tunnel-like structures, called nuclear pore complexes, that traverse the membrane. This process, called nucleocytoplasmic transport, is highly regulated.

In the new study, the researchers looked at how a viral protein called ORF6 affects this process. ORF6 is one of five or six “accessory” proteins made by SARS-CoV and SARS-CoV-2.

“They’re called ‘accessory’ because they are not needed for the for the virus to replicate in a laboratory dish,” Greninger said, “but they can contribute to the pathogenicity of the virus by inhibiting the innate immune response to the virus.” SARS coronaviruses are unique in having significantly more accessory proteins than the four seasonal human coronaviruses, which generally cause infections every winter.

The researchers’ report appears in the American Society for Microbiology’s journal mBio. Amin Addetia, a first-year graduate student in the UW Molecular and Cellular Biology Graduate Program, was the paper’s lead author.

In a series of experiments, members of Greninger’s lab worked with the lab of Michael Gale, Jr., University of Washington School of Medicine professor of immunology and director of the Center for Innate Immunity and Immune Disease. This research showed that ORF6 inhibits infected cells’ ability to produce proteins needed to respond to infection. Normally, to synthesize a protein, a gene in the nucleus must be activated and the instructions encoded in the gene’s DNA  must be converted to RNA. This RNA, called messenger RNA, or mRNA, must then be transported out of the nucleus to molecular machines in the cytoplasm, called ribosomes, that “read” the mRNA and begin assembling the protein.

As part of this process, two proteins, an mRNA export factor called Ribonucleic Acid Export 1 (Rae1), and a nuclear pore complex protein, called (Nup98), play a key role by binding together with the newly synthesized mRNA and shepherding it through the nuclear membrane pore

“It’s as though they hold mRNA by the hand and ‘walk’ it through the pore,” Greninger said.

However, when cells were infected with SARS-CoV or SARS-CoV-2, the researchers found that ORF6 bound to and disabled the Rae1-Nup98 complex. This counterdefense trapped mRNA in the nucleus so that it could not reach the ribosomes in the cytoplasm. This limited the ability of the cell to make new proteins to combat the infection.

“Basically, ORF6 clogs up the nuclear pore, preventing both nuclear import and export, rendering infected cells incapable of responding to infection,” Addetia said. “The viral genes replicate entirely in the cytoplasm. The virus doesn’t need the nucleus, so blocking the nuclear pore with a small protein is a simple way of shutting down the host response.”

In particular, the ORF6’s blockade of the nuclear pore complexes prevents infected cells from responding to and producing antiviral proteins. This limits their ability to generate a group of proteins called interferons, so called because they interfere with viral replication. Interferons have widespread effects, including triggering immune responses that are responsible for such symptoms of infection as fever, chills and fatigue.

“The ability to block interferon is important because it allows the virus to replicate rapidly before you have symptoms, when you’re still likely to be out and about in the community and able to transmit the virus to others,” Greninger said.

The findings underscore the importance of gaining a better understanding the role of the SARS-CoV-2 accessory proteins, according to Greninger.

“A lot of attention has been focused on the virus’s spike protein, but these accessory proteins are another reason SARS-CoV-2 is so dangerous,” he said. “We need to understand what every single protein produced by these viruses does.”