The collisions promote mutations that may help bacteria adapt to stress 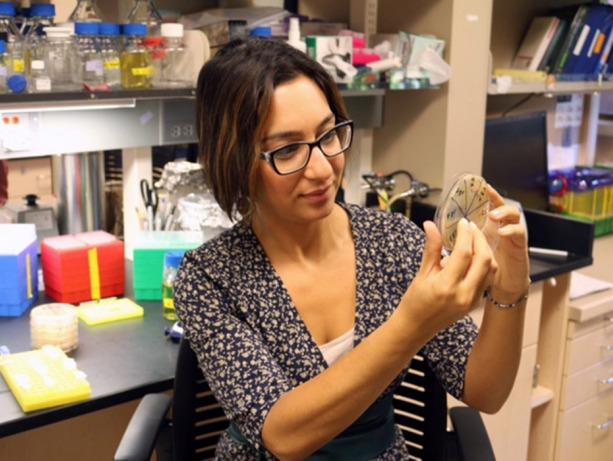 Merrikh Lab
Houra Merrihk in her UW microbiology lab, where she and her team study bacterial DNA replication and how mutations occur.

The study appears in the journal Cell. Read the paper.

Houra Merrikh, assistant professor of microbiology at the University of Washington School of Medicine in Seattle, led the research group.

She said the findings suggest these head-on collisions are part of a process by which bacteria control their evolution by accelerating mutations in key genes involved in coping with new conditions.

"These collisions may serve as a mechanism to promote adaptation under conditions that are critical in a bacterium's life, such as adapting to environmental stresses or, in the case of disease-causing bacteria, to conditions within a host cell during infection" Merrikh said.

The study researchers looked at collisions that occur between two types of molecular machines, large protein complexes that crawl along chromosomes as they "read" the genetic instructions coded in the sequence of the chromosomes DNA.

One of these machines, called RNA polymerase, uses the instructions encoded in genes to assemble a chain of RNA, called messenger RNA (referred to as mRNA). The cell will use this chain as a template to synthesize proteins, a process called transcription.

The job of the other machine, called a replisome, is to make a copy of the chromosome during cell division, a process called replication. This gives both of the cell's offspring its own chromosome. During each of these processes the two strands of the double-stranded DNA must be opened so that the DNA sequences containing the genetic code can be read.

Because most genes are oriented for replication, these machines usually travel in the same direction as they work their way along the chromosome. Because the replisomes travel faster, they sometimes overtake the slower RNA polymerase and cause a rear-end collision.

Although these collisions can interfere with replication, the disruption is usually minor. In those cases, cells have mechanisms to rapidly resolve these problems.

However, there are some genes that are coded within the chromosome "backwards." When these genes need to be expressed, the RNA polymerase must travel in the opposite of the usual direction, and a head-on collision between the RNA polymerase and replisome occurs.

These head-on collisions turn out to have a much greater impact on replication and transcription. They also increase the frequency of genetic errors in these "backwards" genes.

Previous research has suggested that two machines come to a halt because they actually come into direct contact, or as they approach each other, the DNA between them twists into tight coils, thereby checking their progress.

While these may be factors, in the new study, UW researchers demonstrate that another mechanism might explain why head-on collisions are so disruptive and how they increase the formation of mutations in some genes.

What the researchers found was that when these collisions occur, the messenger RNA chain being assembled by the RNA polymerase actually binds to one of the DNA strands behind it. That strand had been opened during the transcription process. This binding creates a RNA:DNA hybrid, called an R-loop (for RNA-loop), which effectively blocks replication.

The researchers found the blockade is so effective that, without an enzyme that removes R-loops, the bacteria die.

But why do these backward head-on genes exist if they pose such a threat? It turns out that most of these head-on genes are ones that are turned on when the bacteria are under stress, for example, when they are exposed to a hostile environment.

Merrikh and her colleagues postulate that in these high-stress situations, the head-on collisions increase mutations in these stress response genes. Some of these mutations can increase the chances that bacterium's offspring will survive and thrive under similar conditions in the future.

Kevin Lang, a postdoctoral fellow in the Merrikh lab, and first author on the study, said the mechanism appears to be a trade-off: Bacteria accept that while the head-on collisions disrupt replication and increase harmful mutations, they also promote the potential for beneficial mutations in key genes that will allow them to survive in difficult conditions.

"One of the bacteria we studied, Listeria monocytogenes, can live in the various environments like salty foods in your refrigerator, or, when you get infected, in your cells," he explained "In order to survive in so many niches, you have to be able to evolve and evolve quickly."