The device, which draws blood from capillaries in the skin, could someday replace standard blood draws for a variety of tests. 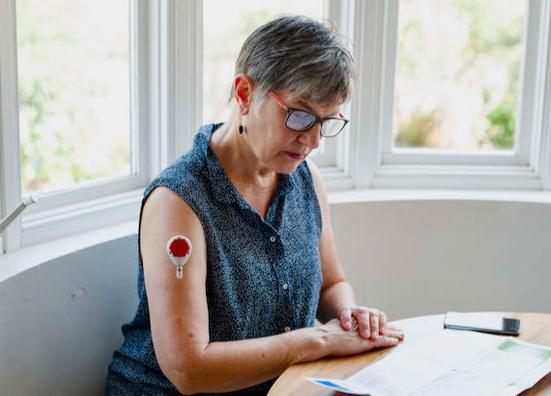 Tasso, Inc.
The device uses a gentle vacuum to draw blood from capillaries under the skin.

A device that could make it possible for patients to draw their own blood at home was successfully used to collect blood samples for measuring antibodies against SARS-CoV-2, the virus that causes COVID-19, researchers at the University of Washington School of Medicine in Seattle report.

The findings suggest the device could be used by patients to draw blood at home for other tests that currently require them to go to a clinic or lab and have blood drawn from a vein, the researchers said.

The study was published Sept. 2 online in the journal PLOS ONE. Tess Hendelman, an undergraduate student in the UW Department of Laboratory Medicine and Pathology was the paper’s lead author. Dr. Chihiro Morishima, associate professor of laboratory medicine and pathology, and Dr. Andrew N. Hoofnagle, a professor in the same department, directed the study.

Participants in the study included 56 people who had previously been infected by SARS-CoV-2 and had recovered. The blood test was to see whether their immune systems had made enough antibodies against the virus that they could donate their antibodies to help treat people with ongoing infections. Thirty-three people without a history of COVID-19, and therefore should not have antibodies to the virus, served as healthy controls.

Ordinarily, blood samples for such an antibody test would require a visit to a lab or clinic where a trained technician, called a phlebotomist, would insert a needle directly into a vein and draw the blood. In this study, researchers wanted to see if a new device, called the Tasso-SST blood sampling kit, made by Tasso, Inc., a Seattle biotech company, could work just as well.

To collect a blood sample with the Tasso kit, the patient cleans an area on the upper arm and applies the device, which is held in place by an adhesive patch. The patient then pushes a button on the device. This releases a small, spring-loaded lancet that pierces the skin. A vacuum created by the device then gently draws blood through the needle prick from the network of capillary blood vessels that is located just below the skin. The capillary blood flows into a collection tube, which the patient removes, caps, and sends to the lab for analysis. The blood draw typically takes a few minutes.

In the study, the participants’ blood was collected three ways. First, they were given the device kit and written instructions on its use and drew their blood with the device on their own. The device was then used to collect a second sample, this time under the supervision of one of the study staff. And, finally, a phlebotomist drew a sample from a vein using the standard technique.

To mimic the extreme conditions the blood might be exposed to during shipment in the winter and summer, the unsupervised self-collected blood samples were exposed temperatures as low as 14 degrees and has high as 104 degrees Fahrenheit.

All the blood samples were then tested concurrently for the antibodies using the EuroImmun anti-SARS-CoV-2 S1 IgG assay in a Clinical Laboratory Improvement Amendments (CLIA)-certified clinical laboratory, an exacting standard.

The researchers report they found no significant differences between the samples collected by the three different ways.

“There was nearly perfect correlation between the results from the venous blood and the capillary blood samples,” Morishima said. “The results were as good as we could have hoped for.”

Whether the device is appropriate for other tests remains to be seen, Morishima added.

“This was a ‘proof-of-principle’ study,” she said. “It shows that the approach can work. But we need to verify its accuracy and reliability for other tests before it can be used routinely for clinical care or research.”

Using the device to test patients during the pandemic has the obvious advantage of reducing the patient’s risk of getting exposed to the virus while traveling to or while in the clinic, said Hoofnagle, but it would also make it easier to collect samples for people with a wide variety of conditions for whom a trip to the clinic or lab is difficult or who live in remote rural areas with no lab or clinic nearby.

The device might also be useful in enhancing the quality of telehealth, Hoofnagle added.

“On video, by talking to and seeing a patient we can often tell if they’re doing OK, but sometimes we need a blood sample to really know what’s going on," he said. "Having the patient collect a blood sample on their own isn’t going to replace a visit to the doctor, but could help improve remote care.”

The study, which was conducted by the staff of the UW Department of Laboratory Medicine and Pathology, was funded by Tasso, Inc.