Treatment of childhood-onset hearing loss can be more precisely tailored with information on specific genetic cause. 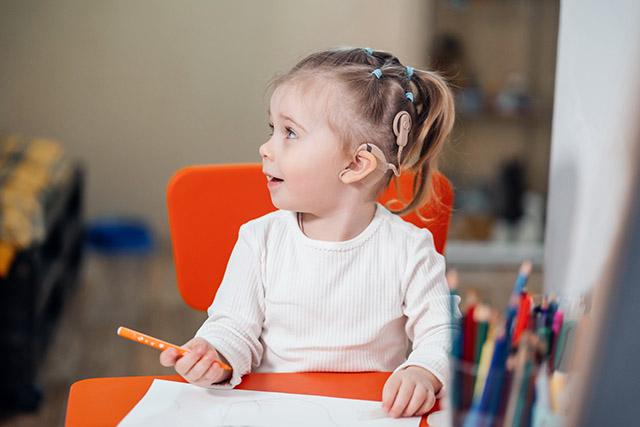 Svetlana Repnitskaya/Getty Images
A young child with a cochlear implant stops to listen while drawing at her table.

Advances in understanding the many different genetic causes of childhood-onset hearing loss indicate that genomic testing could assist in treatment planning, including optimal timing of treatment.

Even if a child with hearing loss did not receive a diagnosis from genetic testing a few years ago, very rapid recent progress in genomics makes re-testing worthwhile, according to scientists in this field.

Hearing loss, usually stemming from sensory problems in the inner ear, affects about 1 in 400 newborns in the United States. About half of these children have a genetic cause for their hearing loss.

More than 120 genes and thousands of different genetic variants can lead to childhood hearing loss. Virtually all children with genetic hearing loss have a mutation or mutations in only one gene.

The findings show that genetic testing is a valuable tool in determining prognosis for a child’s hearing loss and in predicting how useful a cochlear implant could be for that child's understanding of speech.

“With genetic diagnosis, it is possible to anticipate future hearing loss across sound frequencies and progression with age,” the researchers noted in their paper. “This information can be integrated with current severity of hearing loss to decide on treatment.”

The study was led by Ryan J. Carlson, an M.D./Ph.D. student in the Medical Scientist Training Program at the University of Washington School of Medicine.

“For more than half of pediatric patients, genomic testing can now identify a genetic cause for their hearing loss and often provide critical information on its clinical characteristics,” explained Carlson.

The study participants included 449 children from 406 families. Genomic analysis resulted in genetic diagnoses for 210 of the 406 families, including 55 of the 82 families with more than one child with hearing loss and 155 of the 324 families with a single child with hearing loss. Rates of genetic diagnosis were similar for all ancestries in the study group.

In the study population, the researchers detected variants responsible for hearing loss in 43 different genes. With one exception, each child's genetic diagnosis involved only one gene.

All of the children who had cochlear implants had better speech perception than before they received their implants. The degree of success of the cochlear implant varied somewhat based on the participant’s genetic diagnosis.

Taking into account the age of the child at implant and the length of time the implant was in place, speech perception was highest for children whose hearing loss was due to mutations in the MITF or TMPRSS3 genes.

However, the researchers concluded that differences in success of cochlear implants related to the genetic diagnosis was not substantial enough to preclude a cochlear implant for any patient who otherwise met the implant criteria.

The study was conducted from 2019 to 2022 at the otolaryngology and audiology clinics at Seattle Children’s Hospital and the University of Washington, including the Center for Human Development and Disability.

DNA from the participants was analyzed by genomic sequencing and structural variant analysis in Mary-Claire King's laboratory. Severity and progression of their hearing loss was measured through audiological testing, and success of their cochlear implant was evaluated by pediatric or adult speech perception testing.

The research team outlined several key conclusions from their findings:

Second, technologies for genomic analysis are improving rapidly. If a child has already had genetic testing, with negative results, re-testing may find a genetic cause that was previously missed.

Third, genetic testing can identify syndromic forms of hearing loss and lead to necessary referrals of children to key specialists.

Finally, genetic diagnoses can be more effectively used to inform precision treatment for childhood hearing loss. Once the expected clinical characteristics of a certain genetic cause is known, that information can be used to evaluate prognosis and guide treatment.

Overall, the researchers emphasized, “Detection of hearing loss at the earliest possible age is important for cognition and social development, regardless of management approach.”

Carlson noted that the study had a direct positive impact for its participants.

“We were able to provide genetic testing for over 400 families with hearing loss in this one study. Many participants received new genetic diagnoses that were important to their care,” he explained. “I am proud to have directed a project that provided both direct benefits for those involved and indirect benefits for all patients with hearing loss.”