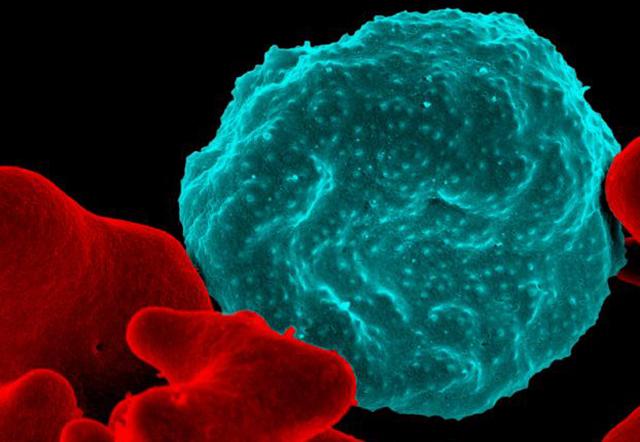 National Institute of Allergy and Infectious Diseases
A colorized scanning electron micrograph of a malaria infected red blood cell, with uninfected cells nearby.

A molecular test, proven more effective than thick blood smears at detecting malaria parasites earlier in an infection, has now received Food and Drug Administration qualification for certain types of clinical trials.  This move, one of the first of its kind for a malaria biomarker, is important for efforts to develop vaccines and better drugs against the tropical disease.

The FDA’s Biomarker Qualification program listed the context in which the biomarker can serve as a monitor. Testing for the biomarker is now okayed for human challenge trials that involve controlled malaria infections and that are conducted in geographical locations where the parasite is uncommon.

In such trials, healthy volunteers between the ages of 18 to 50 receive sporozoites of Plasmodium falciparum.  Sporozoites are the life-stage of the malaria parasite transmitted during mosquito bites.

The biomarker alerts researchers when to start anti-malarial treatment. The test can usually spot the subtle signs of a blood infection shortly after it starts, often before any symptoms appear.

“We can use this test to find malaria parasites in someone, even when the parasites are present in such small numbers that they are just a drop in the bucket,” said Dr. Sean Murphy, associate professor of laboratory medicine and of microbiology at the University of Washington School of Medicine.

Murphy, who is also with the Seattle Malaria Clinical Trials Center at the Fred Hutch Cancer Research Center, led the multi-institutional team that developed and assessed the new biomarker.

The results supporting the biomarker qualification of Plasmodium 18S rRNA are reported in the American Journal of Tropical Medicine and Hygiene.

“The older test to diagnose malaria in tropical countries and in travelers has been around for more than 100 years,” Murphy said. The need for a more sensitive test has become more pressing due to the rising

number of clinical trials for malaria prevention and treatment.

“There are more potential drug therapies and vaccines in the pipeline than ever before,” Murphy said.

In such trials, for example, volunteer participants might receive an experimental drug or vaccine. After a few days, months or even a year later,

they are purposely infected with the parasite.  The researchers then check to see if the treatment prevented or stopped the infection.

“We owe it to our volunteer participants to identify and treat any infections very early, before they experience significant symptoms,” Murphy said.  Such symptoms, if they occur, aren’t unsafe, but the researchers don’t want the volunteers to feel sick at all, if possible.

“In malaria, people’s symptoms track with the number of parasites they have,” Murphy explained. “If you have more parasites, you will generally be more symptomatic.  If you have next to nothing, you may not have any symptoms at all.”

“We also owe it to the scientists who make the drugs or vaccines to get them crisp data on whether those are working or not,” he said.

Murphy explained how the new biomarker spots a malaria infection:  The parasite, like almost all organisms, churns out RNA to copy instructions from its DNA code. The most abundant RNAs produced are ribosomal RNAs. These help make proteins, the workhorses of living cells.  His team designed a molecular test (known formally as a reverse transcription polymerase chain reaction) that can both detect and amplify the parasites’ ribosomal RNA in a human blood sample.  With this test, researchers can diagnose infections three to five days sooner than with the thick blood smear.

“We went forward as an emissary in the malaria research field to use this in clinical trials because it is in fact a better test and has a better target, which is what the FDA was interested in,” Murphy said.

Murphy said that he and his collaborators are largely testing vaccines and drugs intended to block the parasites in the liver.

“After a malaria-carrying mosquito bites a person,” he said, “the parasites go to the liver, where they stay for about a week before emerging into the blood. Our test products are intended to work completely in the liver. But if we do find that parasites have slipped into the blood, we can treat them.”

An advantage for participants and researchers is the elimination of the so-called “hotel phase” of malaria clinical trials, in which participants are housed in individual hotel rooms while they are most likely to have symptoms. In such studies, researchers are on hand 24/7 with lab equipment to do blood smears twice a day, or in the middle of the night if a participant woke up with a fever. The researchers are also nearby to offer immediate treatment for symptoms.

“By catching infections with this biomarker before symptoms appear, everybody is happier,” Murphy said. “People tell their friends about the trials, and we have more participants and get closer to a cure.”

These small-scale challenge studies with local participants enable researchers to answer questions that would take much longer in a field study in the tropics.  For instance:  Should we give a bigger dose? Does the dose wear out too quickly?  What type of dosing regimen works better?

“Another reason why we do trials in places like Seattle is because most people here haven’t been exposed to malaria,” Murphy said.

“In Africa, people might be exposed to the parasites every day of their lives. Many Africans have developed an immune response that confers some protection. That could muddy the waters when we are testing vaccines.” The Seattle-based studies are intended to select the best candidate drugs and vaccines so they can next be tested in places with malaria, hopefully with a higher chance of success if they showed promise in Seattle.

By achieving the FDA biomarker qualification, Murphy said that they have not just empowered the malaria teams in Seattle, but also other groups to use the now-qualified biomarker to accelerate their own clinical trial submissions to the FDA.