The researchers hope their novel drug will safeguard patients from the hearing-damaging side effects of powerful antibiotics. 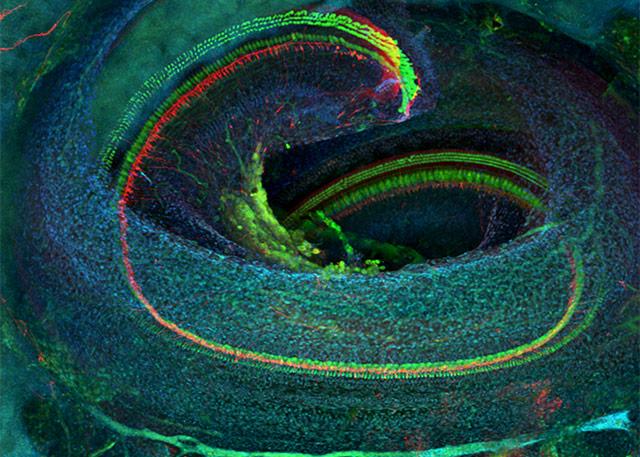 Glen MacDonald, Rubel Lab, University of Washington
Confocal microscope image of the cochlea of a mature mouse. The receptor cells (green) spiral down the twisting cochlea. Nerve fibers are shown in red. Other elements are nuclei of supporting cells.

The first clinical trial of a new drug designed to protect humans’ hearing will involve a compound developed at the University of Washington.

The U.S. Food and Drug Administration has approved ORC-13661 as an investigational drug to protect people from the hearing-damaging side effects of aminoglycosides, a class of antibiotics used to combat serious infections.  The FDA approval clears the way for a Phase I trial of volunteers to confirm whether the drug, which demonstrated significant protective ability in animal models, is safe for humans.

ORC-13661 represents more than a decade of work by two UW scientists:

“Our collaboration started in 2001; it was a novel idea and we got funded," Rubel said. "The goal was to discover how the receptor cells in the inner ear die. Why do some people start to lose their hearing at age 40 and others have good hearing at age 80?”

Their study of zebrafish was pivotal to understanding the mechanisms that affect hearing in humans. Fish have external hair cells akin to the receptor-cell structures in humans’ cochleas, which turn sound waves into electrical impulses for the brain to interpret.

“With the hair cells on the outside of their bodies, we could observe them very readily for genetic and molecular studies,” Rubel said.

Human receptor cells can be damaged as a secondary effect of antibiotics called aminoglycosides, which doctors employ against severe infections in cases of cystic fibrosis, immune suppression, and premature newborns, among other conditions.  These powerul antibiotics – for example, gentamicin and streptomycin – can kill the receptor cells in the cochlea and balance organs, causing permanent hearing loss and unsteadiness for patients.

Over 16 years, Rubel and Raible confirmed that the fishes' hair cells are similar genetically and in other ways to hearing receptor cells in humans and other mammals.

In concert with Julian Simon, a medicinal chemist based at the Fred Hutchinson Cancer Research Center, and others, they tested the ability of more than 10,000 molecules to protect the zebrafishes’ hair cells from the toxic effects of these antibiotics.

“We did a phenotypic screen,” said Raible. “It’s a different approach from many drug screens that target a specific receptor or protein known to be important, and then design a molecule to fit the active site of the protein. Instead, we screened libraries of chemicals to find ones that stopped zebrafish hair cells from dying, and used the one that worked best. But we can’t say we know exactly why it works.”

Their breakthrough results, published last month, involved a change that amplified the effectiveness of a promising compound from earlier studies. The drug demonstrated  outstanding safety and 100-percent protection of hair cells in zebrafish and rats in vivo. This spurred the FDA’s action.

In 2013 Raible and Rubel co-founded a company, Oricula Therapeutics, which exclusively licenses patents for ORC-13661 held by the University of Washington and Fred Hutch.  Oricula made the application to the FDA and will pursue funding for the Phase I trial of the drug's safety in humans, Rubel said. If that were to succeed, the next step would be testing the drug's effectiveness among patients who must take aminoglycosides to stave off life-threatening infections.

Both scientists reflected on the infusion of $34,000 that got them going back in 2001. The money came from the UW’s Royalty Research Fund, a mechanism in which UW’s royalty and licensing fee income is selectively reinvested in promising new research.

“It’s such a cool thing that the university uses royalties to seed new ideas that might one day reinfuse the fund,” Raible said. “The people who came up with the fund should know that it does make a difference in these ventures.”