Eclipse beliefs vary, but eye safety crucial for all

Eclipse beliefs vary, but eye safety crucial for all

Never stare directly at the sun: You could burn your retinas without knowing right away 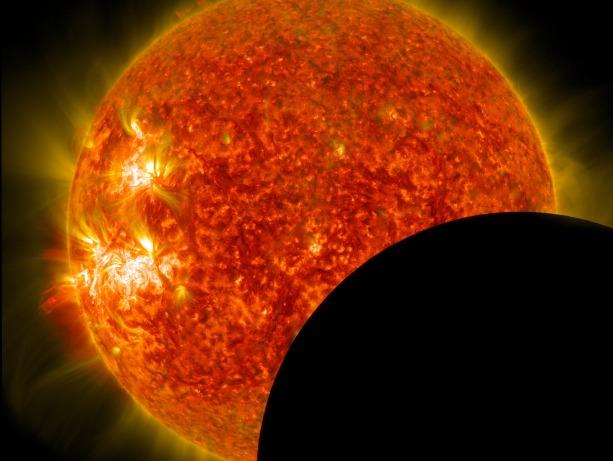 NASA
Leave photographing the August solar eclipse to the professionals, and enjoy the event with safety glasses or indirectly by putting your back to the sun and directing its rays through a pinhole camera.

If you plan on watching the total solar eclipse on August 21, you are not alone: An estimated 1 million people (including me) will flock to Oregon, not to mention the crowds heading this weekend to other parts of America that are also in the path of totality.

Most of us eclipse chasers are prepared: Hotel rooms booked, routes and backup routes mapped out. Yet, in thinking about how the eclipse will affect us logistically and financially, we might not have considered how it will affect us psychologically.

“The effect it has on you is bizarre and primal,” says Woody Sullivan, University of Washington professor emeritus of astronomy who has seen five total solar eclipses. “It only lasts for two minutes, but you have this gut feeling you truly are part of the cosmos.”

For those of us venturing into the path of totality—the approximately 70-mile-wide stretch of land crossing the United States where you can see the moon completely cover the sun—the experience will be dramatic. The amount of light in the sky will be comparable to that during a full moon, Sullivan said.. We will see the sun’s halo-like corona.

If you are in Washington state or elsewhere outside totality, you can still watch the eclipse—with proper eye protection. In Seattle, for example, people will see 92 percent coverage.

Not everyone views the eclipse in a positive light, however. Nancy Maryboy, president of the Indigenous Education Institute, said that traditional knowledge among many Native American tribes regards the eclipse as a bad omen.

“Traditionally, Navajos were told to stay inside during the whole eclipse, not to eat or drink or have sex,” she said. Stories often portray the life-giving sun as being in danger.  A Cherokee tale that depicts the moon as a frog trying to consume the sun.

For Maryboy, balancing traditional knowledge with Western science is an opportunity to deepen her perspective.

“It isn’t an either-or thing: When you have more than one way of looking at the sky, it enhances and enriches your knowledge,” she says.

No matter how you feel about the eclipse, for those of us who plan on watching it, we need to do so safely.

“While the rest of your body has nerve receptors that respond to pain—say, when you accidentally touch a hot surface and your arm jerks back—your eyes don’t,” he explained. “That means you could stare at the sun and burn your retina without knowing right away.”

Our experts provide a few other safety and enjoyment tips:

Sunglasses won’t protect your eyes. You will need to buy solar eclipse glasses that meet the ISO 12312-2 international safety standard or view the eclipse indirectly, such as through a homemade pinhole camera. The only exception is during totality: When the moon completely covers the sun, it is safe to look without glasses.  Make sure you put them back on as soon as totality ends. Depending on where you are, totality could last anywhere from less than a minute to almost three minutes.

All optical devices, like cameras and telescopes, need to be covered with a solar filter. And you should still wear your eclipse glasses when you take photos or look through a telescope.

If you’re driving into the path of totality, bring a first-aid kit plus extra food and water. Especially if you’re going to Oregon, where the sudden influx of eclipse chasers is expected to cause significant traffic delaysand potential food shortages.

Wear extra sunscreen and bring a spare bottle with you if you will be outside for several hours.

Another important tip? Unless you’re confident in your astrophotography skills, put your phone or camera down during totality.

“Just experience it,” Sullivan says. “The sky is so different than anything you’ve ever seen before.”