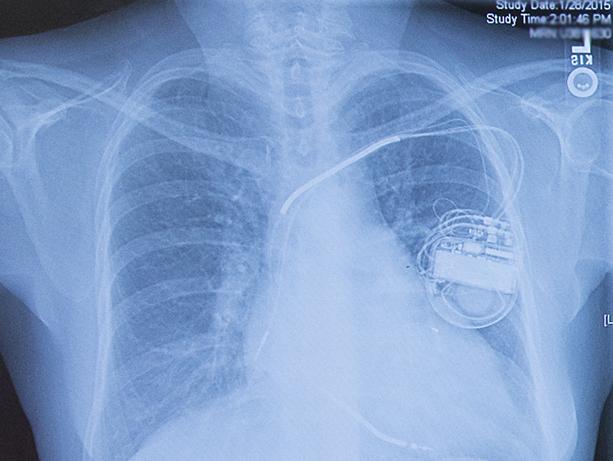 In a study of nearly 6,000 patients with chronic kidney disease and heart failure, the use of implantable cardioverter defibrillators (ICDs) was associated with a significantly increased risk of subsequent hospitalization.

Researchers at the University of Washington School of Medicine and Kaiser Permanente conducted the study, which was published today in JAMA Internal Medicine.

“The finding surprised us,” said lead author Nisha Bansal, a UW Medicine nephrologist with the Kidney Research Institute. “Chronic kidney disease is common in adults with heart failure, and is associated with a greater risk of heart attack. However, in this observational study we did not find a significant benefit from ICDs for patients with kidney disease.”

ICDs are small implanted devices that deliver electrical shocks to the heart to help control life-threatening irregular heartbeats, or arrhythmias. (Pacemakers are a different implanted device which gives off low-energy electrical pulses to treat less-dangerous heart rhythms.) ICDs are standard care to prevent sudden death in patients at high risk of cardiac arrest.

“Because placing an ICD can be expensive and cause other complications, it is critical to better understand how to best use this therapy in high-risk patients such as those with chronic kidney disease,” said senior author Alan Go, a research scientist with Kaiser Permanente Northern California Division of Research. “Based on our results, clinicians should carefully consider the risks and benefits of ICDs when recommending them for this subset of patients.”

The researchers identified 5,877 patients with chronic kidney disease and reduced left ventricular ejection fraction heart failure between 2005 and 2013. Among them, 1,556 had an ICD and 4,321 did not.

After adjusting for demographics, other health conditions, the use of heart medications, and confounding risk factors, there was no difference found in mortality between the patient groups. However, ICDs were associated with a 49 percent increased risk of subsequent hospitalization due to heart failure and a 25 percent increased risk of hospitalization for any reason.

Clinical trials have examined the value of ICDs in the general heart-failure population, Go noted, and have shown that the device increases patients’ protection against sudden cardiac death and improves their overall survival. “The data from our study certainly need to be confirmed by clinical trials conducted specifically in patients with chronic kidney disease,” he added.

This study was funded the National Heart, Lung, and Blood Institute; the National Institute of Diabetes and Digestive and Kidney Diseases; and the U.S. Department of Health and Human Services.

Hear a podcast of Nisha Bansal discussing the study findings.