CPAP for sleep apnea improves sex for women, but not men

CPAP for sleep apnea improves sex for women, but not men 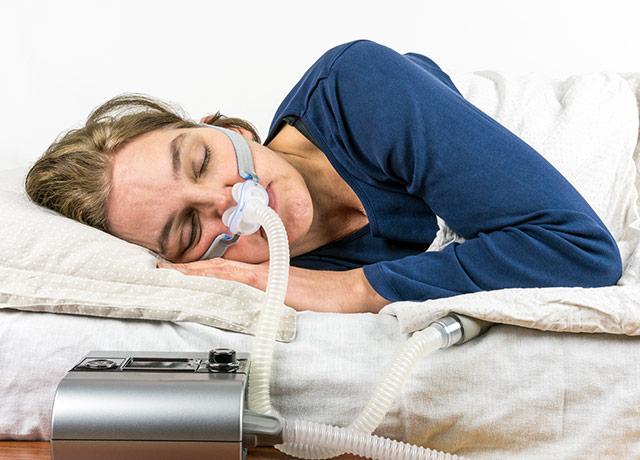 ThinkStock
There’s growing recognition among sleep specialists that women are affected by apnea and can benefit from a CPAP device.

Among women with obstructive sleep apnea, use of a CPAP machine during sleep can lead to improved sexual quality of life, according to a study published today in JAMA Otolaryngology-Head & Neck Surgery. The study findings, however, did not show the same upswing for men, which surprised the researchers involved.

CPAP, short for Continuous Positive Airway Pressure, is a small motorized device that creates a stream of air flowing through a tube connected to a person’s nose. The airflow keeps the sleeper’s throat open, alleviating the interrupted breathing that plagues snorers and invites other health perils.

“There’s a lot of evidence that CPAP improves overall health and quality of life in patients with sleep apnea. And literature, mostly consisting of studies in men, has shown that CPAP treatment for sleep apnea can improve sexual dysfunction,” said Dr. Sebastian Jara, the study’s lead author and a resident physician in otolaryngology-head and neck surgery with UW Medicine/Seattle. The senior author was Dr. Edward Weaver, UW Medicine chief of sleep surgery.

“This study measured sexual quality of life in terms of patients’ self-perceptions. We were surprised to see a pretty big effect in women, but minimal effect in men – especially given previous literature,” Jara said.

The study involved 182 men and women with newly diagnosed obstructive sleep apnea. The subjects answered a quality-of-life survey at their initial clinic visits and again one year later; among the survey’s 25 items were two about sex: “Because of medical problem unable to have sexual relations” and “Lack of desire for sexual relations.” Subjects were asked to score these from 0 to 5, with 0 being “No problem” and 5 being “Problem as bad as it can be.”

Among the subjects, 72 used a CPAP nightly and 110 did not, or could not, use a CPAP. Previous studies have lacked such a control group of CPAP non-users against which to compare results. Those findings may be more vulnerable to suggestions of placebo effect or to the influence of subjects’ other medical factors affecting sexual quality-of-life, such as depression or diabetes, Jara said.

“Our study design gives us confidence in the results we obtained – even though the results, for men, were in contrast to what we expected.”

Many of the past studies, he added, have been done in a male patient population with sleep apnea and some form of sexual dysfunction, such as erectile dysfunction, “so those subjects might have been starting from a relatively worse-off place, which may have resulted in higher self-reported improvement.”

Because sleep apnea is more common men, there are fewer studies, especially those assessing sexual dysfunction, in women. However, there’s growing recognition that women are affected, too, and can benefit from CPAP use. For that reason, Jara said the study results merit the attention of all people who sleep poorly.

“Even if a man is not convinced it will help his sex life, a myriad of other long-term health benefits and improvements in well-being have been demonstrated with CPAP,” he said.