If resource shortages became dire, triage team members would have to deprioritize some patients from getting life-sustaining care. 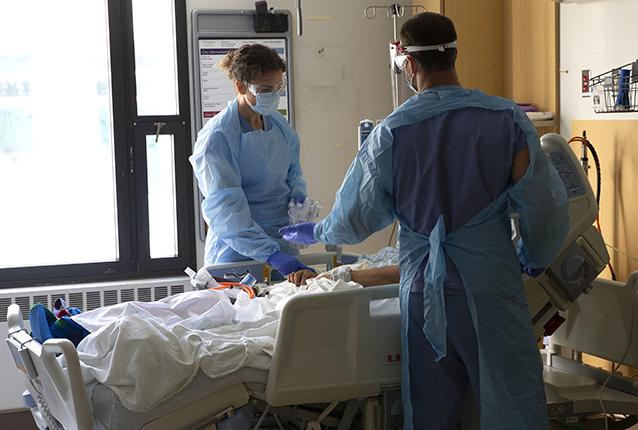 The COVID-19 pandemic has led healthcare organizations to draft plans for critical patient care in the event of shortages of resources such as ventilators. Invoking “crisis-care” standards at a hospital would prompt the deployment of a triage team—three or four seasoned clinicians and a medical ethicist responsible to determine which patients have the best chance of survival and prioritizing these people to receive scarce resources while deprioritizing others.

If this task sounds tragic, you’re in good company: A new analysis conveys the moral distress that triage team members experienced while participating in a simulated crisis-care event in which they had to decide which patients would and would not be prioritized to receive life-sustaining resources.

The paper was published today in JAMA Network Open.

“This was a setting to try to operationalize a process for making life-and-death patient decisions in a way that most medical professionals have never faced before,” said the paper’s lead author, Dr. Catherine Butler. She is an assistant professor of medicine (nephrology) at the University of Washington School of Medicine.

The qualitative analysis was based on interviews conducted from December 2020 to February 2021 with 41 triage-team members from hospitals in Washington state. They had participated in 12 patient simulations and their feedback informed the WA state Department of Health’s guidebook for critical care in response to potential extreme resource scarcity during the pandemic.

The intention of the guidebook, Butler said, is to provide plans based on empirical evidence and community deliberation that would standardize the triage process, improve fairness, and reduce the emotional toil involved in the grave deliberations for which triage team members might be unprepared.

The goal of the state’s prep work was to clarify operational, clinical and ethical issues and develop a standardized framework before invoking crisis-care standards. That way, triage teams would simply get a limited set of data about patients, make a prognostic determination and objectively prioritize care, she said.

Triage-team members were solely asked to grade patients’ chances of surviving until hospital discharge. The decisions were based on far less information than would be the case in usual clinical care.  Triage team members, for instance, did not know personal information, such as race and gender, that might introduce bias into a decision to continue care. They did not know how many other patients were competing for a scarce resource.

Triage-team members completed the task but, as the process unfolded, they voiced uncertainty and misgivings about operational and ethical aspects of their role. The analysis included quotes from participant interviews (see comments in inset).

Participants also expressed tension between feelings of duty to individuals and the bigger-picture responsibility to allocate resources fairly, Butler said.

“Balancing your patient's priorities versus priorities of others is quite hard for clinicians. You want to advocate for your patient, but with crisis care you have to wear a different hat, one that looks across all patients and prioritizes fair distribution of scarce resources at a population level,” she said.

Some triage-team members said the simulation presented parallels to their work in busy emergency departments or in resource-limited countries, where decisions are frequently based on providing care for as many people as possible with limited supplies or staff. For these doctors, the nature of the task was not entirely unfamiliar.

Still, Butler said, “our findings acknowledge that people in this triage-team role will probably struggle with this difficult task, no matter how much experience they have.” In fact, some triage team members felt that struggling with such a consequential decision was part of their duty to respect the patients involved, she said.

“No one wants this [triage-team] job; it’s not why anyone chose a career in medicine. But we did hear from multiple participants that having a more concrete idea of what is entailed in a simulation made them more confident about being in these roles if they had to.”

This paper is the last in a series of three in which Butler and colleagues studied the development of plans for crisis-care circumstances.