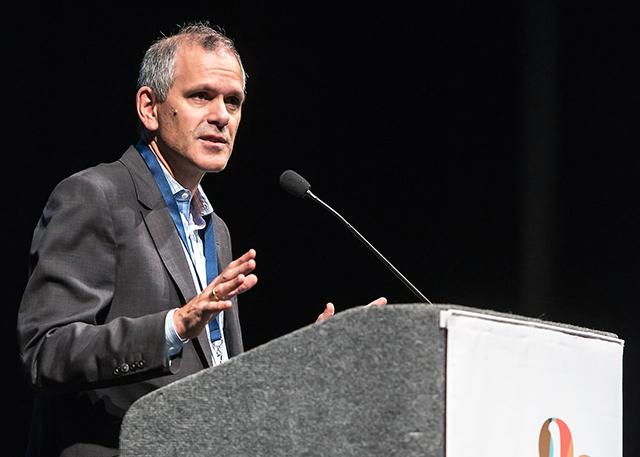 The new Department of Health Metrics Sciences at the University of Washington School of Medicine in Seattle will officially start July 1 with Dr. Christopher J.L. Murray, who is recognized globally for his work on health data analytics, at its helm.

The department was created to serve at the forefront of the emerging science of health metrics, according to Dr. Paul G. Ramsey, CEO of UW Medicine, executive vice president for medical affairs, and dean of the UW School of Medicine, who announced Murray’s appointment as founding chair.  It is the world’s first academic department devoted to this scientific discipline.

Murray will continue in his position as the director of the university’s Institute for Health Metrics and Evaluation (IHME), which he established in 2007.

“Chris Murray is highly regarded for his ability to bring people from many professional fields, organizations and countries together to work for the common good of improving the lives of the world’s children and adults,” said Ramsey.  “In doing so, he has kept to principles of scientific integrity, public relevance, the open sharing of knowledge, collaboration, and political impartiality. He will now bring his solid, respected leadership to faculty and students in a field that has become crucial to defining local, national and global health agendas.”

Murray is a professor of health metrics sciences at the UW School of Medicine with adjunct appointments in global health and in health services.  With funding from the Bill & Melinda Gates Foundation, he led the formation of IHME, an independent global health research center administratively based in UW Medicine.  IHME will remain as a separate research institute based in UW Medicine.

Under his leadership, IHME grew into a staff of over 400 and a worldwide network of 3,500 academics, scientists, and researchers, who collaborate on the institute’s studies.  It has established an international reputation for advancing the science of health metrics, and for compiling comprehensive, timely data and evidence for policymakers and public health advocates.  IHME is renowned for its Global Burden of Diseases, Injuries and Risk Factors (GBD) study, its role in tracking financing for health, and its project mapping health throughout the world at the 5 by 5 square kilometers level.  Through faculty development, scholarly analyses, and student training, the new Department of Health Metrics Sciences

will fortify efforts to reduce the burden of disease. The work of the new department will strongly support the UW Medicine mission to improve the health of the public.  It will also contribute to the UW Population Health Initiative and will foster collaborations among public health agencies, health care systems, clinicians, and professionals from many fields, including epidemiology, informatics, economics, statistics, demography, and data sciences.

In the new department, Murray will promote an interdisciplinary approach for obtaining reliable measurements of population health and its determinants.  Such analyses will provide quantitative insights into influences on health in the United States and worldwide.

“Our goal is that the department will encourage a strong sense of community among diverse researchers and trainees, attune to their driving interests in data science for the pubic good, and set new standards for discovery and innovation for the health of the public,” Murray said.

Murray’s lifelong interest in health analysis was initiated partly by his parents who practiced medicine in their home country of New Zealand, as well as in Niger, Kenya, Ethiopia and the Comoros Islands.  As a boy, he began to wonder how the overall health of a nation’s people, not just the amelioration of specific diseases, could be improved.

Murray received a B.A. degree in biology from Harvard College in 1984, and a D.Phil. in international health economics from Oxford University in 1987.  He returned to the U.S. to earn an M.D. from Harvard Medical School in 1991.

He went on to study the world’s most pressing health problems and strategies for correcting them, as well as to reduce health disparities.  Murray’s commitment to providing accurate, unbiased evidence led him to design more rigorous ways to analyze and compare the performances of public health and medical care systems and the effectiveness of health technologies.

Murray served at WHO from 1998 to 2003 as the executive director of the Evidence and Information Policy Cluster.  From 2003 to 2007, he directed the Harvard University Initiative for Global Health and the Harvard Center for Population and Development Studies, and was the Richard Saltonstall professor of public policy at the Harvard School of Public Health.

His research team is credited with the global burden of disease approach, which systematically quantifies the loss of health, over time, due to diseases, injuries, and risk factors, by age, sex, and geographical location. The Global Burden of Disease project now provides annual updates.

In the early 1990s, with Dr. Alan Lopez, the Australian public health scholar and then a colleague at WHO, Murray developed a new metric to compare disability and death from various diseases, and to explore the effects of other factors, such as smoking or obesity, to the overall burden of disease.  Murray and Lopez were awarded the John Dirks Canada Gairdner Global Health Award in 2018 for their groundbreaking work in conceptualizing and quantifying the Global Burden of Disease.  Similar approaches have been employed to provide a county-by-county view of health status in the United States.  Some of IHME’s recent analyses include mapping the consequences of the Zika virus, examining why so many Americans are dying young, and investigating growing disparities in the life spans of the rich and poor.