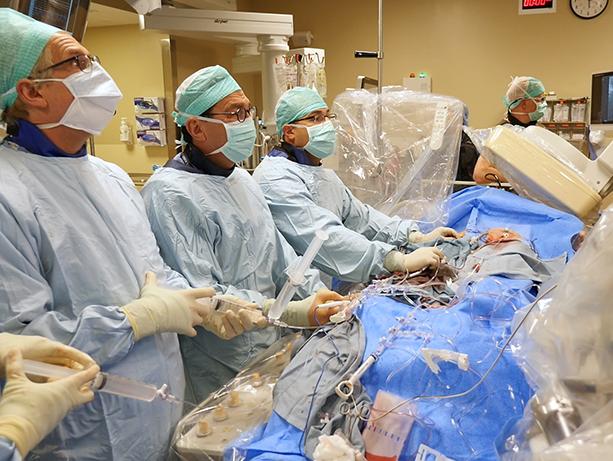 A UW Medicine cardiologist has taken another step into the realm of heart surgeons in performing a first-in-the-world intentional cut via catheter to replace a patient’s failed artificial aortic valve.

The patient, Myra Gaines, of Kennewick, Washington, underwent the “BASILICA valve-in-valve” procedure July 17 at the University of Washington Medical Center. Her daughter, Kim Lee, said Gaines celebrated her 87th birthday on Aug. 4 and was “doing real well” as she reached the milestone of 30 postoperative days. “We walk around the block four times a day,” Lee proudly reported last week.

“It feels like the start of a new era. We’re going beyond implanting equipment through tubes. We are doing minimally invasive surgery, cutting inside the body, via catheter,” Dvir said excitedly.

The team also performed the second such procedure that day on a resident of Soldotna, Alaska, who also is recovering well, a family member said.

The two cases represent a subset of people whose original surgical valve has failed and needs replacing, but whose anatomies put them at high risk of dying during a traditional valve-in-valve procedure. Both cases involved compassionate use of a never-before-used technique because no alternatives existed and the patients’ conditions were grave.

Dvir’s intentional laceration to the old valve device before implanting the new valve greatly reduces the likelihood of a catastrophic complication.  And it suggests that more life-extending care is possible via catheters, thin tubes threaded into blood vessels by heart specialists – and especially so when patients are too weak for open surgery.

Four valves open and shut to during each heart beat and provide blood to the body. The aortic valve, between the left ventricle and the aorta, has three scalloped leaflets that open and close in sync. When disease makes the leaflets too weak or too rigid to close tightly, blood pressure can drop and the rest of the heart must work harder. People can experience breathing difficulty, chest pain, and fatigue. Heart failure can develop.

Since the early 1960’s, surgeons have replaced faulty human aortic valves with metal alloy frames and leaflets composed of metal or cow or pig tissue. These replacement valves are sutured in place during open-heart surgery, which, 50-plus years later, is still the gold-standard repair.

In the past 10 years, though, artificial tissue valves that can be tightly folded and then expanded like origami have enabled cardiologists to do this job, too, transporting and placing the devices with a catheter threaded through a blood vessel into the heart.

This minimally invasive “transcatheter aortic valve replacement" – TAVR, for short – allows patients who are too old or weak for open heart surgery to receive the same life-extending device.

TAVR also has enabled valve-in-valve procedures when original implants fail – as with Gaines’ device, which had been surgically implanted in 2011.

Every year, more than 5 million Americans are diagnosed with heart-valve disease, giving rise to 80,000 to 90,000 U.S. aortic valve replacements annually. Artificial-tissue valves work well, but often start to fail after five to 15 years.

Problem-solving the risk of specific anatomies

Dvir, regarded internationally as a valve-in-valve expert, was recruited by UW Medicine last year.  He recognized that a small subset of patients who undergo the aortic procedure have an anatomy whereby placing the second valve significantly heightens risk of obstructing blood flow to the coronary arteries because they’re so close to the valve junction.

The reason: Placing the new valve inside the old valve, like one sleeve within another, permanently forces the leaflets of the old implant into the “open” or upright position. For patients whose coronary arteries are farther from the valve, this is no problem. But if those vessel branches are too near the valve, a permanently open leaflet could easily block blood flow and spur a heart attack.

A previous workaround tried to address this, with limited success. Dvir said many valve-in-valve recipients whose coronary branches are near the valve do not survive a procedure using that previous approach.

Dvir was aware of work done at the National Heart Lung and Blood Institute by Drs. Jaffar Khan and Robert Lederman. Lederman’s lab, part of the NIH, develops new medical approaches and translates them into medical practice.

"This is an example of a very rapid collaboration in which Dvir learned of one technology we had and asked if it was applicable to a problem he has with his patients. We’re applying it first to patients in desperate need who have no other options,” said Lederman, who was present at the Seattle procedures.

Dvir described the technique: “We created a mechanism to surgically cut that leaflet in the original valve, so that when it’s pushed up, it creates a V shape and blood can get past it to the artery. We do it just before we place the second valve.”

Through the catheter, he and the team introduced a wire snare designed to catch the target leaflet and pull it taut, then introduced a second wire and electrified it to cut the leaflet from root to tip.

The procedure's complexity is appreciable: Unlike open-heart surgery, TAVR procedures afford no clear visual. Cardiologists navigate procedures on monitors, using landmarks derived from three tools: CT scan, x-ray angiography and transesophageal echocardiography, the latter two of which are live video images that help guide the catheter to its destination and then orient valves.

Dr. Adam Greenbaum of the Henry Ford Hospital also was in Seattle to help guide the first two BASILICA repairs, after which he performed the third such case.