Study findings suggest that a vaccine could be used to prevent or treat a particularly aggressive form of breast cancer. 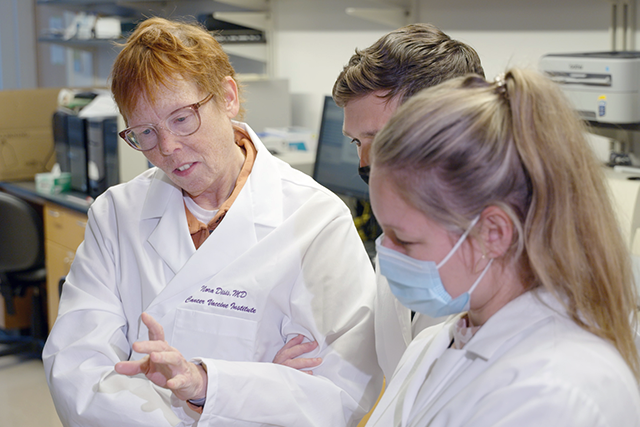 An experimental vaccine against breast cancer safely generated a strong immune response to a key tumor protein, researchers from the University of Washington School of Medicine in Seattle report in a paper published by the journal JAMA Oncology. The findings suggest the vaccine may be able to treat different types of breast cancer.

The phase I trial was designed to evaluate the safety of a vaccine that targets a protein called human epidermal growth factor receptor 2 (HER2) and to see if it generated an immune response to the protein.

HER2 is found on the surface of many cells, but in as many as 30% of breast cancers, HER2 is overproduced by as much as hundred times the amount seen in normal cells. These “HER2-positive” cancers tend to be more aggressive and more likely to recur after treatment, but the overproduction of HER2 also triggers an immune reaction that can be beneficial.

Specifically, patients with HER2-positive breast cancers who mount a type of immune response called cytotoxic — or cell-killing — immunity are less likely to see their cancer recur after treatment and have longer overall survival than those who do not mount such an immune response.

To stimulate this kind of response, Disis and her colleagues created a DNA vaccine. Unlike protein vaccines, which typically contain a protein or part of a protein that you want the immune system to target, DNA vaccines contain the DNA instructions for the target protein.

Once injected, this DNA is taken up by cells at the injection site, which then start to produce the protein encoded in the vaccine’s DNA instructions. The cells will then present the protein to the immune system, a process more likely to generate a strong, cytotoxic immune response.

The vaccine used in this trial contained the DNA instructions for a part of the HER2 that is usually located within the cell. This intracellular portion is known to provoke stronger cytotoxic immune responses.

Sixty-six women who had metastatic cancer were enrolled in the study. All the women had completed a standard course of therapy and had either achieved complete remission or only had tumor remaining in their bone, which tends to grow slowly.

The participants were then followed for three to 13 years (median follow-up was nearly 10 years). A long follow-up was important because HER2 is found on many other cell types. The researchers wanted to ensure the vaccination did not, over time, trigger an autoimmune response against other healthy tissues bearing HER2.

“The results showed that the vaccine was very safe,” Disis said. “In fact, the most common side effects that we saw in about half the patients were very similar to what you see with COVID vaccines: redness and swelling at the injection site and maybe some fever, chills and flu-like symptoms.”

Although the study was not designed to see if the vaccine could slow or prevent progression of the cancer, the researchers noted that the participants have done much better than would be expected in patients with similar stages of breast cancer, about half of whom would be expected to die within 5 years of treatment.

“We’ve now followed these women for ten years and 80% of them are still alive,” Disis noted.

“If the results of the new randomized-controlled phase II trial of the vaccine are positive, it will be a strong signal for us to rapidly move forward to a definitive phase III trial,” Disis said. “I have high hopes that we’re close to having a vaccine that can effectively treat patients with breast cancer.” [The phase II trial is recruiting patients; contact the patient coordinator at uwcvi@uw.edu or 206-543-3829.

The list of researchers on the study who declared competing interests can be found in the JAMA Oncology paper, or journalists can contact our office for a copy: mediarelations@uw.edu