UW Medicine scientists are discovering how the brain functions when figuring out shapes that are fully seen or partially covered. 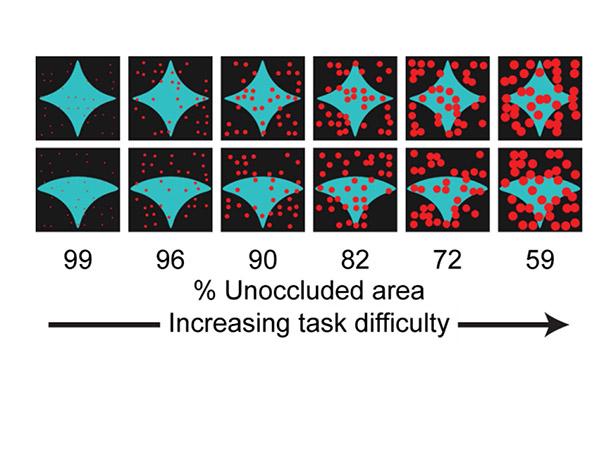 Pasupathy ShapeLAB/UW Medicine
Recognizing shapes becomes increasing difficulty as more of the image is hidden, and requires parts of the brain to work together to decipher.

How does a driver’s brain realize that a stop sign is behind a bush when only a red edge is showing? Or how can a monkey suspect that the yellow sliver in the leaves is a round piece of fruit?

The human (and non-human) primate brain is remarkable in recognizing ing objects when the view is nearly blocked.  This skill let our ancient ancestors find food and avoid danger.  It continues to be critical to making sense of our surroundings.

UW Medicine scientists are discovering ways that the brain operates when figuring out shapes, from those that are completely visible to those that are mostly hidden.

Although computers can beat the world’s best  chess players, scientists have not yet designed artificial intelligence that performs as well as the average person in distinguishing shapes that are semi-obscured.

Studies of signals generated by the brain are helping to fill in the picture of what goes on when looking at, then trying to recognize, shapes.  Such research is also revealing why attempts have failed to mechanically replicate the ability of humans and primates to identify partially hidden objects.

The most recent results of this work are published Sept. 19 in the scientific journal eLife.  Read the paper.

The senior investigator is Anitha Pasupathy, associate professor of biological structure at the University of Washington School of Medicine in Seattle and a member of the Washington National Primate Research Center.

There’s a computer game at the center that can be played to tell if two shapes are alike or different.  A correct answer wins a treat.  As dots start to appear over the shapes, the task becomes more difficult.

The researchers learned that, during the simpler part of the game, the brain generates signals in certain areas of the visual cortex – the part for sight.   The neurons, or brain nerve cells, in that section responded more strongly to uncovered shapes.

However, when the shapes begin to disappear behind the dots, certain neurons in the part of the brain that governs functions like memory and planning – the ventrolateral prefrontal cortex – responded more intensely.

The results, according to Pasupathy, suggest how signals from the two different areas of the brain -- thinking and vision -- could interact to assist in recognizing shapes that  are not fully visible.

They researches believe that other regions of the brain, in addition to those they studied, are likely to participate  in object recognition.

“It’s not just the information flowing from the eyes into the sensory location of the brain that’s important to know what a shape is when its partially covered, shape,” she said.  “Feedback from other regions of the brain also help in making this determination.”

Relying only on the image of an object that appears on the eye’s retina makes it hard to make out what it is, because that image could have many interpretations.  Recognition stems not only from the physical appearance of the object, but also the scene, the context, the degree of covering, and the viewer’s experience, the researchers explained.

The study helps advance knowledge about how the brain typically works in solving this frequently encountered perceptual puzzle.

“The neural mechanisms that mediate perceptual capacities, such as this one, have been largely unknown, which is why we were interested in studying them,” Pasupathy noted.

Their recent findings also makes the scientists wonder if impairments in this and other types of communication between the cognitive and sensory parts of the brain might have a role in certain difficulties that people with autism or Alzheimer’s encounter.

Pasupathy said, for example,  some people with autism have a profound inability to function in cluttered or disorderly environments.  They have problems processing sensory information and can become confused and distressed.  Many patients with Alzheimer’s disease experience what is called visual agnosia.  They have no trouble seeing objects, but  they can’t tell what they are.

“So understanding how the sensory and cognitive areas in the brain communicate is of utmost importance to ultimately understand what might go wrong inside the nervous system that can cause these deficits,” Pasupathy said.

Other researchers on this study were Amber Fyall, Yasmine El-Shamayleh, Hannah Choi, and Eric Shea-Brown, all from the University of Washington in Seattle.