MRI demonstrate that the amygdala grows too rapidly between 6 and 12 months of age, before characteristics of autism fully emerge 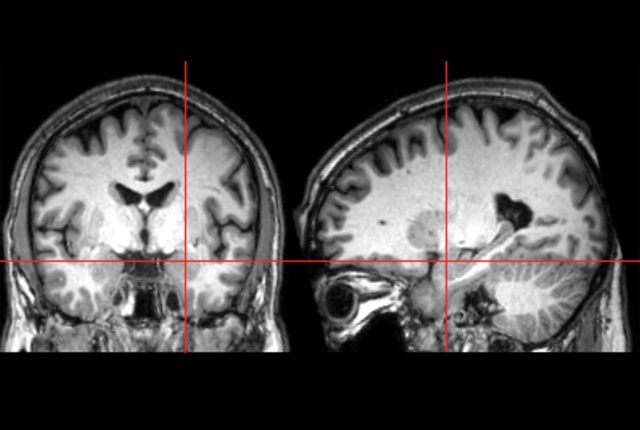 The amygdala is a small structure deep in the brain important for interpreting the social and emotional meaning of sensory input – from recognizing emotion in faces to interpreting fearful images that inform us about potential dangers in our surroundings. Historically, the amygdala has been thought to play a prominent role in the difficulties with social behavior that are central to autism.

Researchers have long known the amygdala is significantly larger in school-age children diagnosed with autism, but it was unknown precisely when that enlargement occurs. Now, for the first time, researchers from the Infant Brain Imaging Study (IBIS) Network, which includes the University of Washington, used magnetic resonance imaging (MRI) to demonstrate that the amygdala grows too rapidly in infancy. Overgrowth begins between 6 and 12 months of age, before the characteristics of autism fully emerge, potentially enabling the earliest identification of this condition.

The new study, published March 25 in the American Journal of Psychiatry, is the first to document amygdala overgrowth before autism appears clinically. The research was conducted through the IBIS Network, a consortium of 10 universities in the United States and Canada.

The study also showed that increased growth of the amygdala in infants who were later diagnosed with autism differed markedly from brain-growth patterns in babies with another neurodevelopmental disorder, fragile X syndrome, where no differences in amygdala growth were observed.

“We also found that the rate of amygdala overgrowth in the first year is linked to the child’s social deficits at age two,” said first author Mark Shen, assistant professor of psychiatry and neuroscience at the University of North Carolina Chapel Hill and faculty of the Carolina Institute for Developmental Disabilities. “The faster the amygdala grew in infancy, the more social difficulties the child showed when diagnosed with autism a year later.”

Earlier studies by the IBIS team and others  revealed that even though the social deficits that are a hallmark of autism are not present at 6 months of age, infants who go on to develop autism have altered attention to visual stimuli in their surroundings in the first year of life. The authors hypothesize that these early alterations with processing visual and sensory information may place increased stress on the amygdala, leading to its overgrowth.

“We are getting closer to understanding why autism occurs by learning more about brain growth alterations early during development, in this case how amygdala growth may be influenced by early sensory processing difficulties and, conversely, how amygdala growth alterations may influence a baby’s interaction with their environment,” said Dr. Stephen Dager, professor of radiology in the UW School of Medicine and an adjunct professor of bioengineering.

As part of the IBIS Network, the UW has been involved in several studies over the years. In 2019, the multicenter research team received a five-year, $9.5 million grant from the National Institute of Mental Health to continue their efforts to determine whether brain imaging can help detect infants who are likely to go on to develop autism spectrum disorder.

The UW Autism Center established an infant clinic in 2017, which provides evaluations for infants and toddlers and support for caregivers. Just as with older children with autism, psychologists and behavior analysts help create treatment plans with clinic- and home-based activities.

The Autism Center has also evaluated sleep issues as part of both long-term research studies and in the clinical setting. A 2020 study led by the UW was the first to show links between growth in the hippocampus – a key part of the brain for learning and memory -- and sleep problems in infants who are later diagnosed with autism.

“It is so exciting see the work of so many dedicated families and researchers over the last 16 years come together to reveal things we have never known before about how autism develops,” said Annette Estes, director of the UW Autism Center. “By assessing and monitoring development in infants who have a family history of autism, we can learn better ways to support caregivers and work on finding innovative ways to help infants reach their fullest potential.”