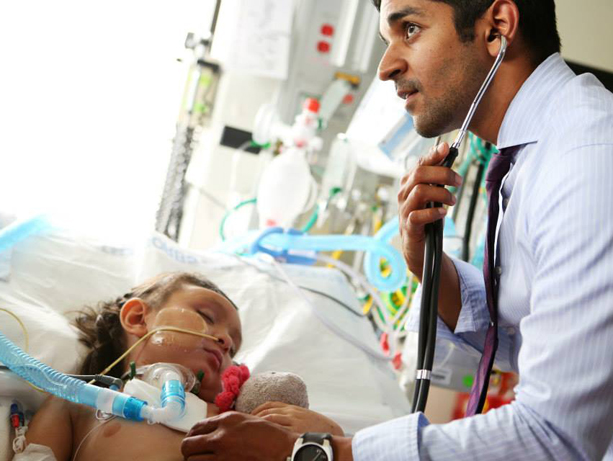 Diana Sage-Jenkins was the first to notice the connection between her daughter Sarah Jenkins, 6, and pediatric resident Alok Patel.

The young girl from Spokane was transported to Harborview Medical Center in August for treatment of an arterial aneurysm. Sarah was in the pediatric intensive care unit and minimally responsive, unable to speak. However, her mother knows her to be inquisitive and, in Patel, recognized a similar personality trait. “He just reminds me of Sarah.” Sage-Jenkins said. “She likes to know as much as she can about people and the things she is learning about.”

Patel calls Sarah his “home girl” and said she embodies the central challenge of pediatrics.

“Pediatrics is medicine in its most raw form,” he said. “You can't count on a child to tell you exactly what hurts or what their concerns are. What you're left with are clinical exams and essentially watching them to attempt to do what they do best: act like kids.”

Sarah's case is even more challenging because she cannot communicate verbally.

Throughout the girl's monthlong stay, Patel encouraged her parents to personalize her room. They put up photos of her swinging, playing soccer and wearing a Seahawks jersey.

“It’s a way for us to remember that we were treating their daughter in her entirety,” said Patel. “ That the little girl, beneath her breathing tube, her arterial line and the electrolyte abnormalities, was actually a fun-loving, spirited, adventurous 6-year-old.”

“He is an advocate for her,” she said.” He was the first to recognize that Sarah is Sarah and made us feel not so out-of-place here."

Their connection was further solidified when they realized they share the same birthday, March 5.

So when Sarah was transferred to Seattle Children’s Hospital recently, her parents were ecstatic to find Patel had also made his way there.

“It was really nice to see his face,” Sage-Jenkins said. “It was like ‘OK Lord, this is where we belong.’ ”