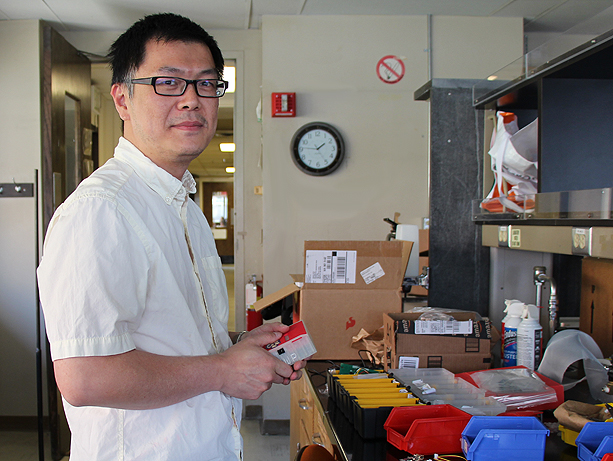 If data indicated that you were exposed to harmful noise levels at work, would you do anything about it?
If a personalize phone app suggested that a walk in the park tended to improve your mood, would you
step out more often?

Such questions propel Edmund Seto. He’s a University of Washington researcher and inventor who wants
to heighten individuals’ awareness of their surrounding micro environments, wherever they go, and in doing
so, to learn whether the information spurs healthy changes in behavior.

The device he’s building is like a FitBit for the bubble of space you occupy.

“It’s about collecting and giving people information about the hazards they face personally. Air pollution is
something we all understand, but this could apply to any toxin, to noise, and so on,” he said. “You are willing
to track yourself and understand something about your world, but” – he raises an eyebrow – “would you change?”

Seto is an associate professor of environmental and
occupational health sciences. He measures people’s
exposures to hazards and assesses the
associated health risks.

For years he downloaded and analyzed air-quality data
collected by the federal government’s
refrigerator-size monitoring stations. The
information tells which neighborhoods
have worse air and whose residents’
disease risk is prospectively higher.

“You live near this monitor, your exposure is X,” Seto said
of the reasoning. “It’s simplistic. It doesn’t say much
about an individual’s exposure because very few people
spend all their time in one neighborhood.”

He designed and crafted a low-cost, soda can-size sensor that clips to a belt and gauges air quality
as well as noise, temperature and physical activity.

“Then you know their cumulative exposure, wherever they are. Wouldn’t people want to know
where the bulk of their air-pollution exposure comes from, especially if they’re asthmatic or have
COPD (chronic obstructive pulmonary disease)?”

Seto is like a fisherman figuring out how to use a newfangled net: His device and the smartphone app
he developed can gather environmental data at a personal level. But what data is worth trawling for?

He’s crossing the seas to find out.

The wearable sensors have been used in China to study air-quality’s relationship with pediatric obesity
and in the United States to see air pollution’s effects on black women, who are prone to hypertension
and diabetes. In Uganda the mobile monitors helped discern where children acquired intestinal parasites.

Seto also developed CalFit, a smartphone app with customizable short surveys that ping an owner at
random times during the day. One survey asks, “Just before the beep, how happy were you feeling?”
“How stressed were you feeling?” Finger-tap responses (from multiple choices), when overlaid with info
about the time, place and activity, can derive associations about mood and environment.

CalFit has been used to survey Shanghai residents about the beverages they consume to gain insight
about nutrition choices in urban and rural areas. In Europe the app showed associations between the
natural environment and users’ well-being.

The small projects, he hopes, will build confidence in his emerging sensors and apps.

“When you start developing new instruments, people don’t have that data confidence yet; they want to
establish how it compares to the federal instrument,” Seto said.

But the excitement is hard to quell. Portable measurement can take scientific understanding to a new level of precision.

“It is just a matter of applying them to interesting studies. There are some fascinating challenges in urban planning
and its impact on environmental health.”