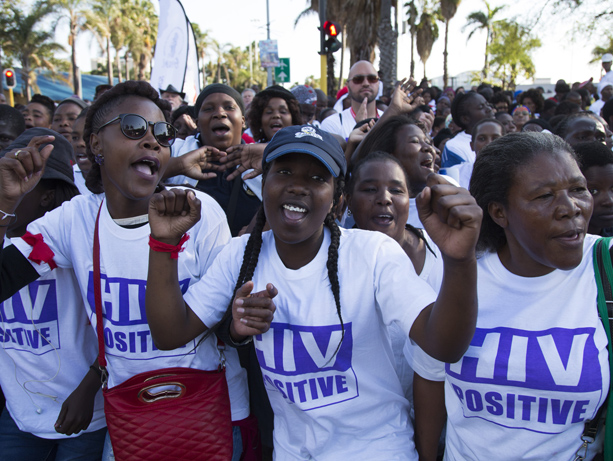 New data analyses finds that a monthly vaginal ring containing an antiretroviral drug called dapivirine can cut women’s HIV risk by more than half and, in some, by 75 percent or more.

University of Washington School of Pharmacy researchers found that an HIV prophylactic drug, Tenofovir, in topical-gel form, is broken down by a common vaginal bacterium, Gardnerella.

Vaginal rings are flexible products that fit high up in the vagina, where they release a prophylactic drug slowly over time.  The Microbicide Trials Network is funding studies on the effectiveness of the dapivirine ring.

In February, results of the ASPIRE (A Study to Prevent Infection with a Ring for Extended Use) trial found that, among all study subjects, the device reduced HIV risk by 27 percent; in women 21 and older, who appeared to use the ring more consistently than younger women, risk reduction was more than 50 percent. The study was a Phase III trial that enrolled 2,629 women ages 18-45 at 15 sites in Malawi, Uganda, South Africa and Zimbabwe. The initial results were published in The New England Journal of Medicine.

Jared Baeten was an investigator in the ASPIRE study of HIV protection for women.
picture of Jared Baeten

The new results are based on additional exploratory analyses indicate the dapivirine ring may be far more effective when used most or all of the time.

“These results suggest that the dapivirine ring, when used with high adherence, could provide significant protection against HIV,”  said Jared Baeten, a University of Washington professor of epidemiology, medicine and global health, who helped chair the clinical study. “These results are extremely encouraging as we move forward with additional work on the dapivirine ring.”

Researchers are now enrolling ASPIRE participants in a second study, HOPE (HIV Open-label Prevention Extension) to better understand why the ring may work better in some women than others.

Women account for nearly 60 percent of adults with HIV in sub-Saharan Africa, where unprotected heterosexual sex is the epidemic’s primary driver. Despite advances in HIV prevention, women – young women, especially – still face disproportionate risk.  A number of current prevention options, including oral PrEP (pre-exposure prophylaxis), are not accessible or practical for many women.

In APSIRE, women received a new ring each month. The ring contained 25mg of dapivirine, about 4 mg of which was released over 28 days. The ring was meant to be used for a month at a time and women could insert and remove it themselves.

Adherence was measured by testing for the presence of the dapivirine in blood samples from women’s quarterly visits and, starting one year into the study, by testing the amount of residual drug remaining in used rings that women returned to the clinic at monthly visits. The analysis presented at AIDS 2016 included 2,359 women and data from more than 12,000 returned rings.

The new analysis lead by Brown developed a so-called time-varying model to examine the ring’s effectiveness.

The model considered how the drug is released over the 28-day intended span and the variable duration that women had a ring. It also considered that women who tested positive for HIV at their monthly visit likely became infected in the prior two to 12 weeks.

Using this model, researchers identified four levels of adherence, from non-use to near-perfect use. HIV protection for those who used the ring most consistently ranged from 75 percent in one analysis to 92 percent in another, each with statistical significance.

The dapivirine ring was developed by the nonprofit International Partnership for Microbicides, which this month will begin a third study on the ring called DREAM (Dapivirine Ring Access and Monitoring).

The Microbicides Trial Network also plans a study that will evaluate how adolescent girls and young women use the monthly dapivirine vaginal ring and Truvada as daily pre-exposure prophylaxis.

Along with Baeten, the HOPE study is co-led by Thesla Palanee-Phillips of the Wits Reproductive Health and HIV Institute in South Africa, and Nyaradzo Mgodi from the University of Zimbabwe-University of California San Francisco in Harare, South Africa.

Note: See NPR blog Goats and Soda (July 23, 2016) for how the vaginal ring is allowing women to take control of their bodies.

*Lisa Rossi is with The Microbicide Trials Network.